Sleepy Hollow is literally almost upon us, and as such, some of you might have either forgotten what led us to this critical point in the season and others of you out there might be scratching your head, trying to catch up from Season One. Since I’ve been following this show religiously, I’m here to catch you up on what went down this season in a series of bullet points and links to posts. Grab your popcorn, your special talisman or holy water, and read along. 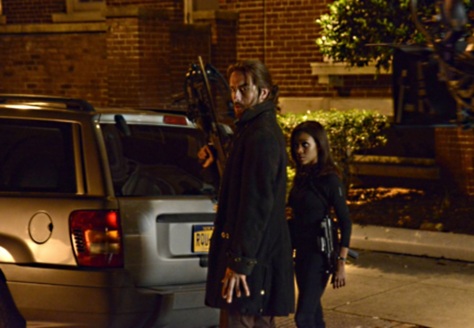 • The season starts with Ichabod and Abbie weathering the first divide: the return of Katrina and her subsequent watering-down of Team Witness’ progress. Also, Henry is Jeremy, Ichabod and Katrina’s son, who has given his life to Moloch to become the Horseman of War. Katrina is held captive by the Horseman of Death, aka Abraham, aka her former fiance and Ichabod’s former friend. (Ichabod stole his woman).

• Team Witness awaken The Kindred, a Frankenstein’s monster created by Ben Franklin, to save Katrina from the clutches of Abraham. But surprise! She wants to stay to “spy” only after Abraham schools her on how connected Ichabod actually is to Abbie.

• Relics hunter (and, like Katrina, another controversial character) Nick Hawley is introduced to us. He has info on how Team Witness can stop a demonic coin from possessing the townspeople, but first they have to get the coin from Jenny first, who, now possessed, is currently out for the head of the new sheriff, Sheriff Reyes. Reyes put Jenny and Abbie’s mother in the psych ward, leading to her untimely death. Katrina’s still fretfully annoying, but she’s not in this episode much.

• Ichabbie is still trucking along at this point, even with Katrina out of Purgatory. Nick tags along with the two as they take down the Pied Piper, Meanwhile, Henry’s still scheming, Abraham’s still trying to make Katrina turn to the Dark Side, and Katrina’s still ineffective. Irving’s still in the psych ward and Jenny’s out doing her own thing. This is possibly where the breakdown of fan goodwill begins. 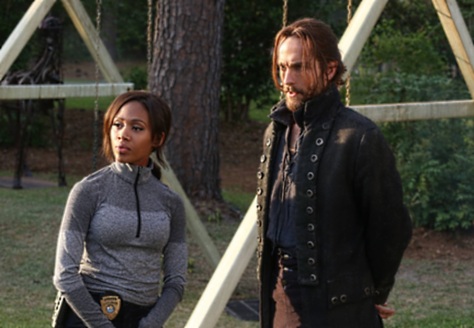 • One of my favorite monsters this season, The Weeping Lady, turns out to be the former flame of Ichabod. Of course, it would have been cooler if The Weeping Lady was the traditional Mexican monster La Llorona, but given the version we have to work with, she’s very interesting, especially since Katrina would be tried for manslaughter for her death. Yes, Katrina killed her. Or, at the very least, didn’t help her that much when she fell. In any event, she didn’t tell Ichabod about it and tried to evade is angered questioning until he basically said, “And I am telling you, I’m not going!” (Ironically, this is what The Weeping Lady, Mary Wells, told Ichabod centuries ago.) The beginning of the end of their marriage is here. Also, RIP Caroline, Ichabod’s reenactment friend. 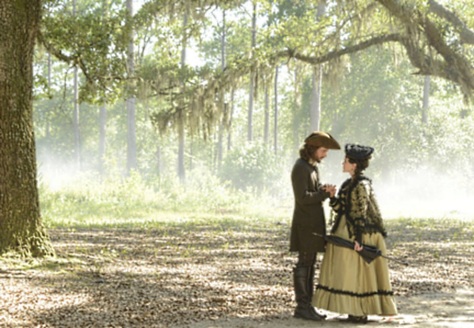 • Joe Corbin comes to Sleepy Hollow. The son of former Sheriff Corbin has a big problem–he’s a shapeshifter werewolf beast. He’s also annoyed with Abbie for stealing all of his father’s attention. But Abbie doesn’t give up on him and not only do they save him from his affliction, but he apologizes for his rude behavior and welcomes her back into his life as his sister-friend. We don’t know if we’ll see him again, but expect it. Everyone who is still annoying (i.e. Katrina and Hawley) are still annoying, particularly Hawley in this episode, who’s trying to mack on both Mills sisters. I can’t go for that, Hawley. No can do.

Irving also nearly loses his sanity when Henry, who now has Irving’s soul in the most clever and mundane way possible — using his lawyer cover to get Irving to sign an evil “legal” document with a pen that pricked his finger and made him sign in blood — tells him to win his soul back by killing someone who deserves death. Of course, Irving doesn’t do it because Henry would still own him, but in a different way. 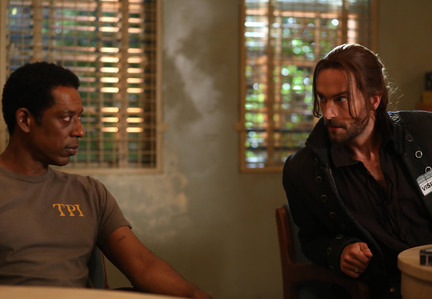 • Now the real fun begins. And by “fun,” I mean the breakdown of the fandom when it comes to Ichatrina and Ichabbie and Katrina’s utter uselessness. Via Henry’s machinations and his hatred for his mother, Katrina nearly births Moloch into the world, almost costing her her life. Katrina really brings down the Ichabbie dynamic (in terms of teamwork) and brings the show to a grinding halt whenever she’s on screen, but her being a literal plotpoint is just as frustrating. Having Abbie work her butt off to save her also grated on fans’ nerves, since they didn’t want Abbie to be subservient to Katrina. By the way, of course they win against Moloch, but not for long.

• Katrina’s now a full-fledged member of Team Witness, which is not a good thing, since her primary goal (it would seem) is to drive a wedge between the Witnesses, who are ordained to basically be joined at the hip at all times in order to save the world. Abbie is the only one who can really see through her charade, and even when Abbie think she probably got her wrong, Katrina winds up going back to Abraham, saying that it’d be best if she pretended like Ichabod was now with Abbie romantically. Katrina says she’ll use the time with Abraham to “spy.” REALLY?! 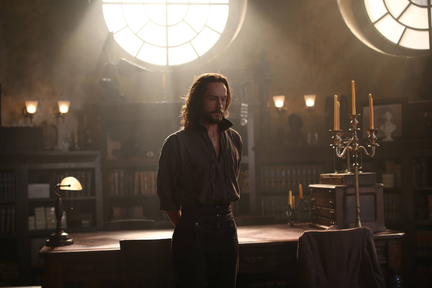 • Ichabod and Abbie have to save unwitting townsfolk from a succubus released by Henry in order to give sustenance to a feeble baby Moloch and bring him fully to the world. Hawley’s feelings for Abbie are revealed, Ichabod’s feelings of doubt about his wife are really brought out into the forefront as is his jealousy/suspicion about Hawley, and MOLOCH IS BORN! Also, Katrina states that she’ll go and kill Baby Moloch. Of course, being who she is, she doesn’t. Instead, she gets lured in by the most basic of magic tricks; the hex on Moloch, showing him as a human baby. Her mother’s guilt (and personal lack of smarts) is her undoing.

Somewhere in here, #AbbieMillsDeservesBetter started trending on Twitter. To read about that and the fandom backlash, click here.

• Abbie and Jenny find out the ghost of their mother is still haunting the psych ward. Turns out she didn’t kill herself like they were led to believe, but she was murdered by a demonic nurse. Abbie and Jenny get the closure they need without any men or any witches mucking stuff up. In fact, Abbie and Jenny (Jenny in particular in this episode) realize that they have their own brand of magic in their family —West African magic. 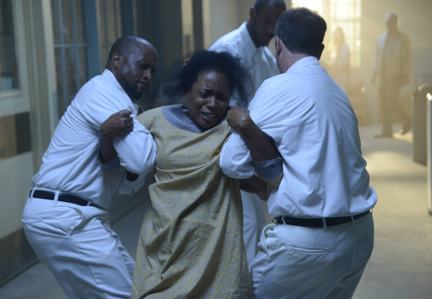 • Abbie and Ichabod get Methuselah’s sword from a cave guarded by a gorgon using Abraham’s headlessness. Also, Abraham and Ichabod sword fight over Katrina and Jenny tries to shuttle Irving to Canada. However, wanting to fight his own battles instead of hide, Irving gives Jenny the slip and hides underground to await his personal day of reckoning.

• That day of reckoning comes around when the full Team Witness (yes, everyone, including Hawley and Katrina) face down Moloch and his demons (and Henry and Abraham) as the apocalypse is upon them. They manage to thwart the apocalypse, but it costs Irving his life. But doesn’t Henry still own it? 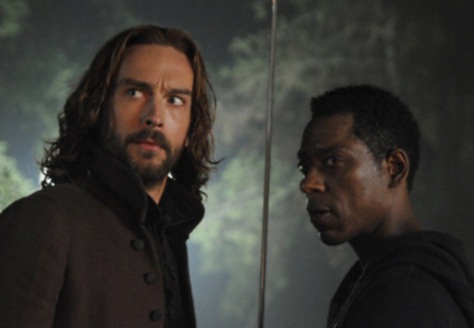 Also, Ichabod sees Katrina for the trick she really is when he catches her telling Abraham that she really loves him. It would seem these are her real feelings, but she tries to deny them when she’s explaining herself to Ichabod. It doesn’t work, a big argument ensues and they both decide to just be comrades-in-arms until they can figure out their Facebook relationship status (currently: “It’s complicated”).

Henry also kills Moloch after realizing he’s not the apple of his demon dad’s eye like he thought. So now what? 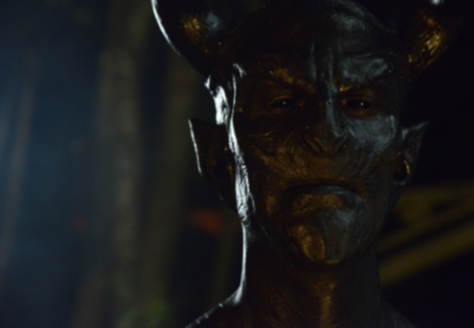