Mo’ Korea: Yes, you can find cushion foundations for women of color

Photo by Marcus Lewis on Unsplash

While K-pop is Korea’s biggest export, K-beauty is definitely the country’s second-biggest. The innovations of K-beauty have taken the entire international beauty world by storm, and K-beauty’s emblem of sorts is the cushion foundation. Everyone who has tried cushion foundations praise them for their ease of use and dewy, poreless finishes. However, there’s a problem. Not everyone can use these foundations. Women of color are usually left out of the cushion foundation conversation.

The biggest problem women of color interested in K-beauty have when it comes to cushion foundations is that there isn’t a large skintone range covered in their products. Most of their products include shades that range from light to beige and that’s it. Of course, the obvious concerning cushion foundations is that Korean companies are catering to the majority of their customers–other Koreans.

But many women of color find fault with K-beauty companies and with good reason, since many of these companies are open to international business. Even though there are tons of K-beauty fans from around the world, and even though many K-beauty brands, if not every K-beauty brand, have international sites that allow for shoppers from around the world to buy their products, the brands still don’t see the need to expand their ranges to match a wider consumer base. In short, many K-beauty brands aren’t thinking diversely, globally, internationally. While every customer can partake in lipstick, sheet masks, and moisturizing skin creams, not every customer can partake in the wonders of a cushion compact.

There are a lot of reasons as to why K-beauty hasn’t expanded across the board towards women of color. Part of it is, I think, economics. Even though Korea does have an immigrant community that includes the African diaspora among other racial and ethnic groups, the community is very small, and the companies probably don’t feel like there’s much incentive to create products for such a small group. Hear me out–I’M NOT SAYING THIS IS RIGHT. I’m just saying this might be how companies are thinking.

Something that backs up this theory is the Jung Sael Mool brand, headlined by the celebrity makeup artist of the same name. As highlighted on K-Youtuber WhitneyBae’s channel and Jung Sael Mool’s own channel, Jung Sael Mool had created a foundation for darker skin tones. She even used that foundation on Whitney during a campaign featuring models of various shades. I tried to find this foundation by searching both Jung Sael Mool’s Korean and American websites, but I soon found that even though the same foundation line was there, the darker skintone had been discontinued. The same has occurred with other K-beauty brands who broadened their range, only to discontinue them a little later.

Korean brands should definitely cater to their darker-skinned citizens, but there might also be another, sadder reason why K-beauty hasn’t expanded as much as they could. Korea is growing out of its racist past. For us in the West who have grown up in multicultural spaces, it might seem like they’re learning very slowly. But as covered in my other article about the multicultural children’s choir that performed at the Winter Olympics, the country is actually moving at a faster pace than many might expect, considering how much racial baggage the country actually has to reckon with. Even still, that doesn’t negate the racism and colorism Korea still has. Even if a person is a native-born Korean, there’s still the pressure to be lighter-skinned. With that attitude still prevalent, my second theory regarding the lack of shades in K-beauty is this: since lighter skin is more desired, K-beauty companies might feel an economic and social incentive to make products geared towards lighter skintones. If there’s a demand, then they can meet the supply.

Something similar was going on in American beauty companies until just a few decades years ago, and even then, the market only really started changing in 2017, with the release of Fenty Beauty and their groundbreaking 40 shades upon their debut. For years, beauty companies would only make up to a certain paper bag shade, forgetting that there were darker-skinned women who wanted to find makeup for them. There was a clear gap in the market, but beauty companies ignored it, since the beauty standards were still centered around Eurocentric standards (even more so than they are today in 2018). 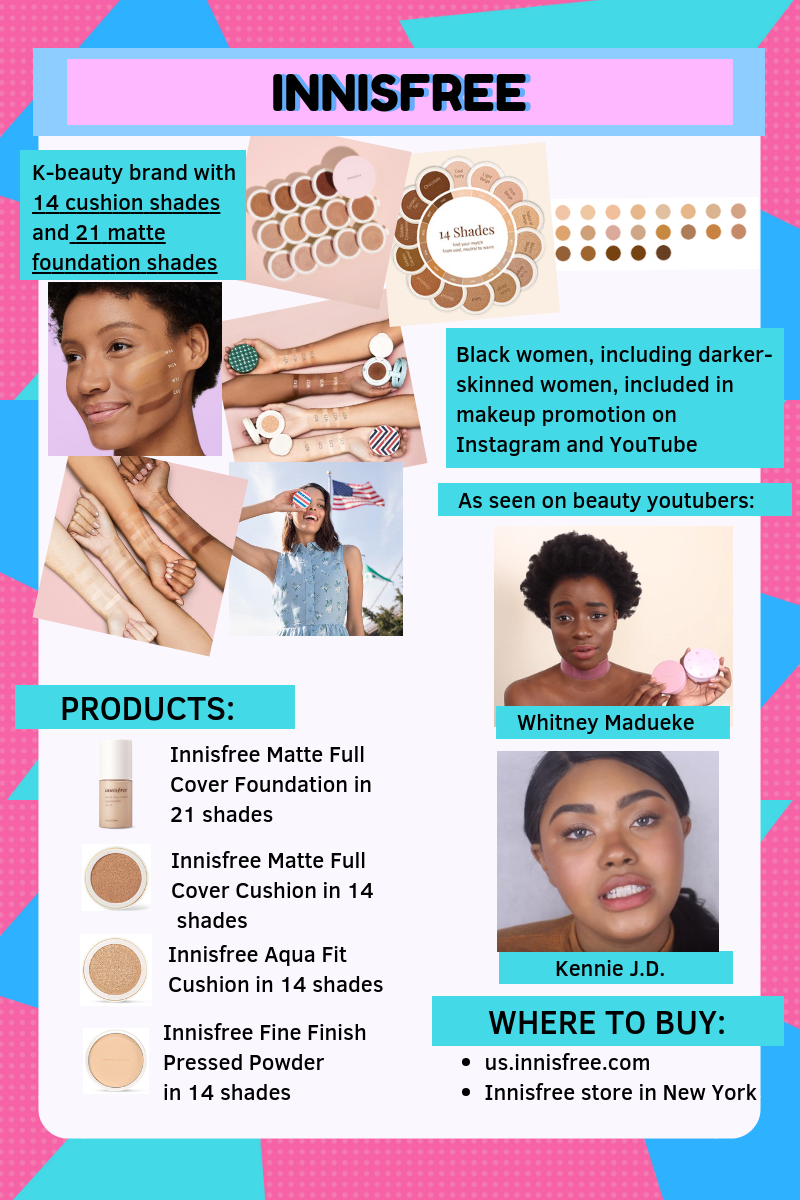 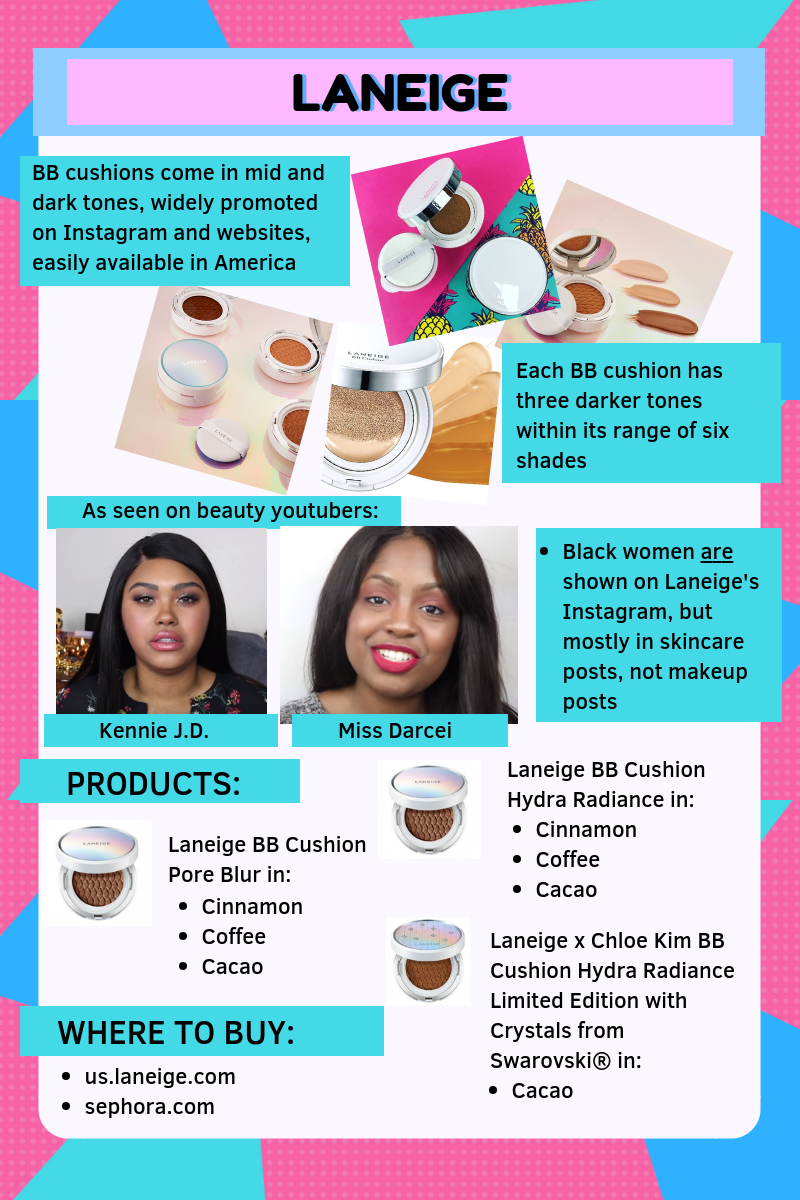 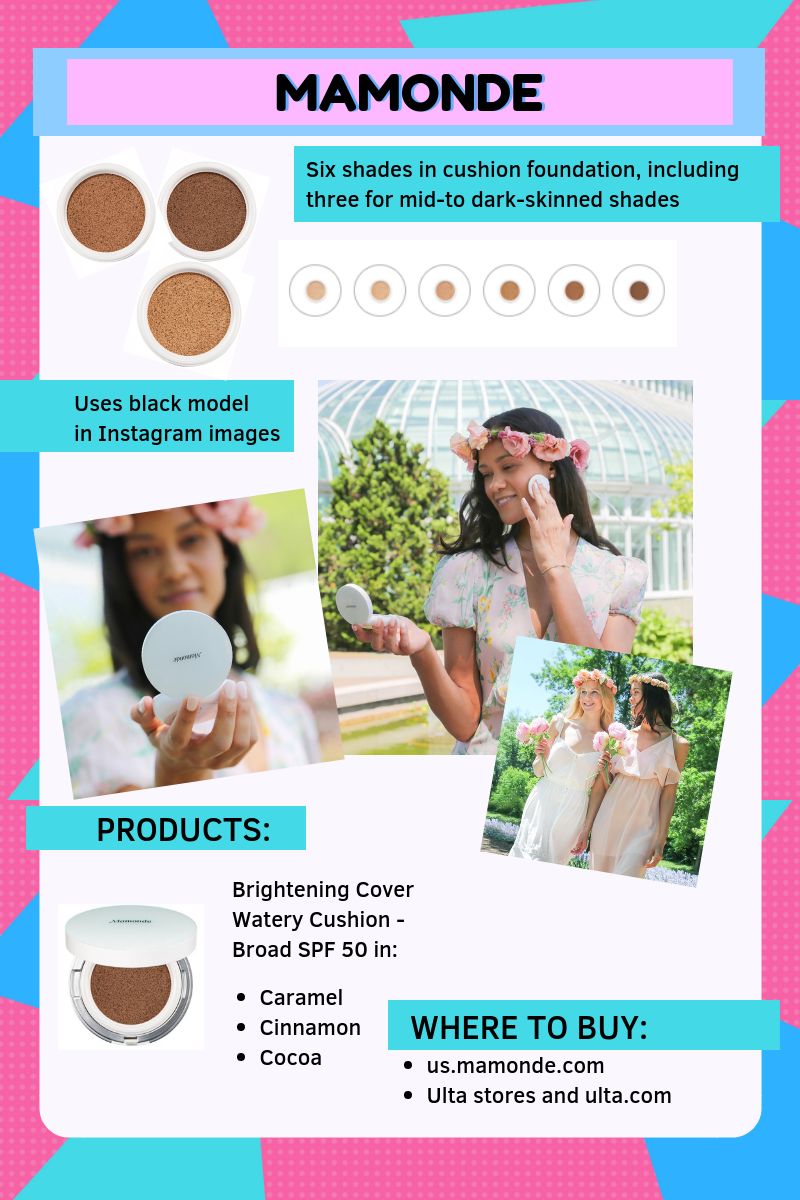 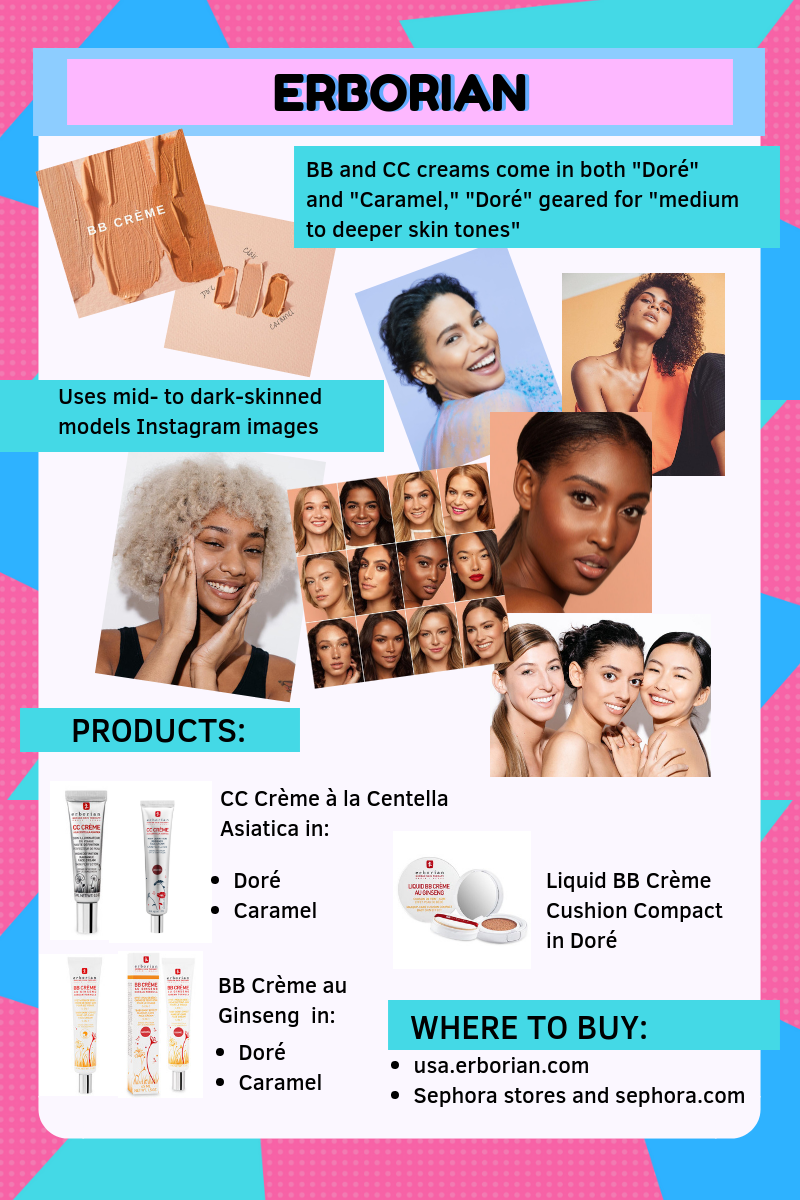 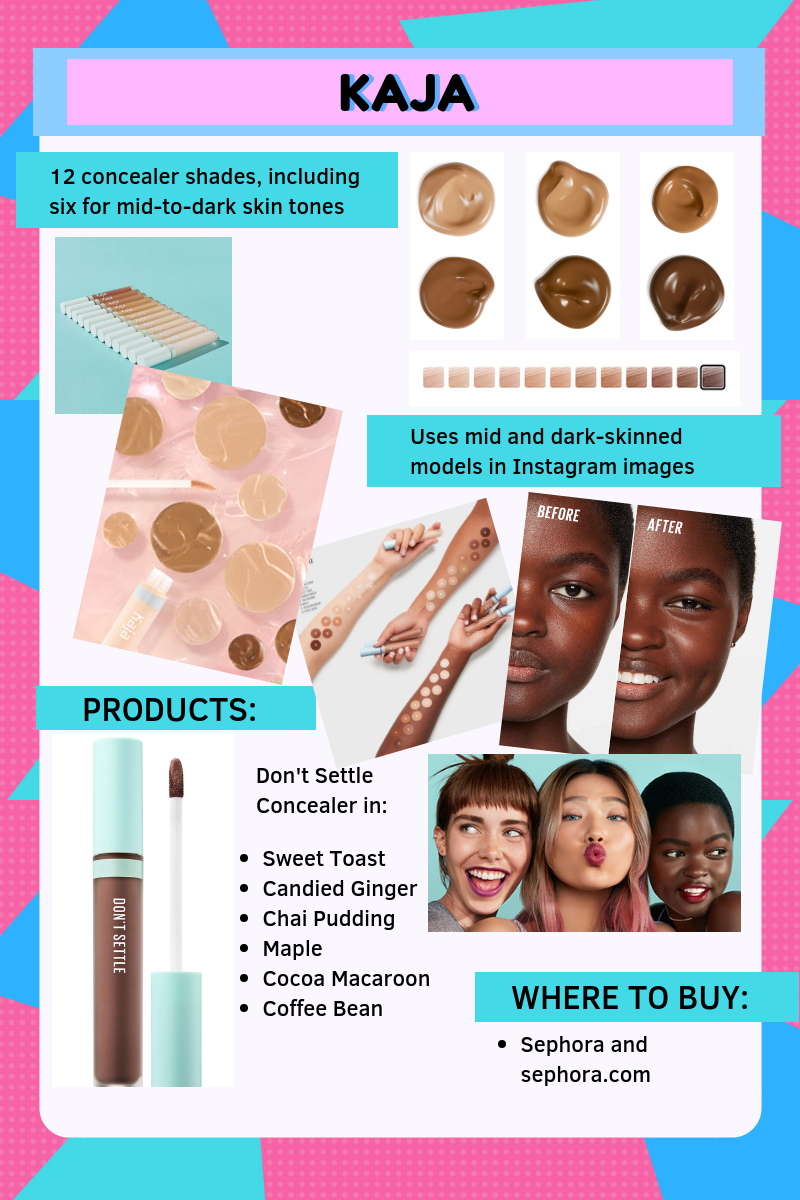 Part of the reason these brands have more shades than other K-beauty brands is because many of them are either advancing into the United States or are realizing the market potential of underserved customers. For instance, Erborian and Laneige are available at Sephora. Sephora’s house K-beauty brand Kaja in particular is the first K-beauty brand to be created in conjunction with an American company. Mamonde is available at Ulta and Innisfree now has a U.S. flagship store in New York.

Erborian and Kaja are also brands that are made specifically for markets outside of Korea. While Laneige has expanded while being a Korean-centric brand, Erborian is a brand jointly created by Korean and French founders, and France, of course, is a multicultural country that should understand the necessity of meeting the needs of its multicultural society. Kaja, as stated above, is a brand made for Sephora, and of course Sephora was going to make sure their line reached as many people (and their wallets) as possible.

Since these brands are the only five I could find that catered to women of color, clearly this shows that the market of K-beauty products still largely cater towards lighter skin tones. If you are still unimpressed with the shade ranges presented in these lines, then there are plenty brands that are prevalent in North America that cater to a more diverse market, including the Canadian indie brand Diba by Dibaswette, a brand inspired by K-beauty and specifically designed for the underserved market of women of color who want to experience a cushion foundation. 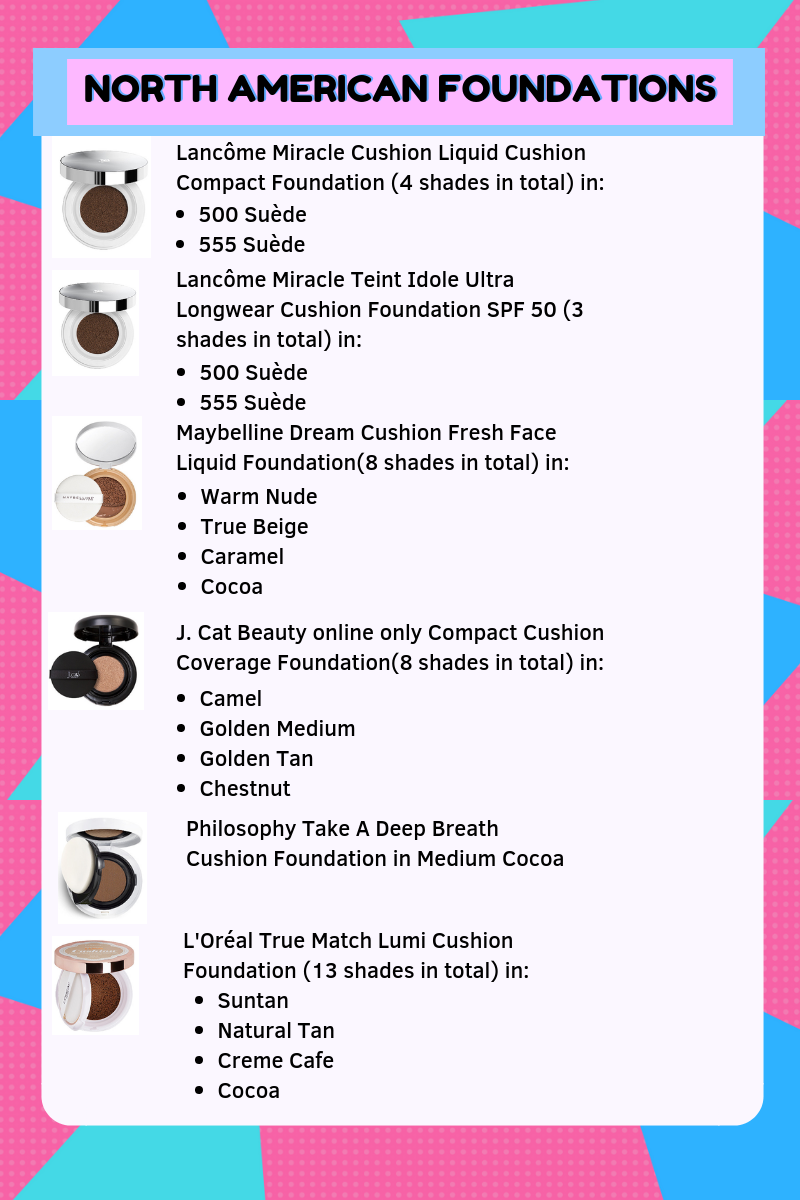 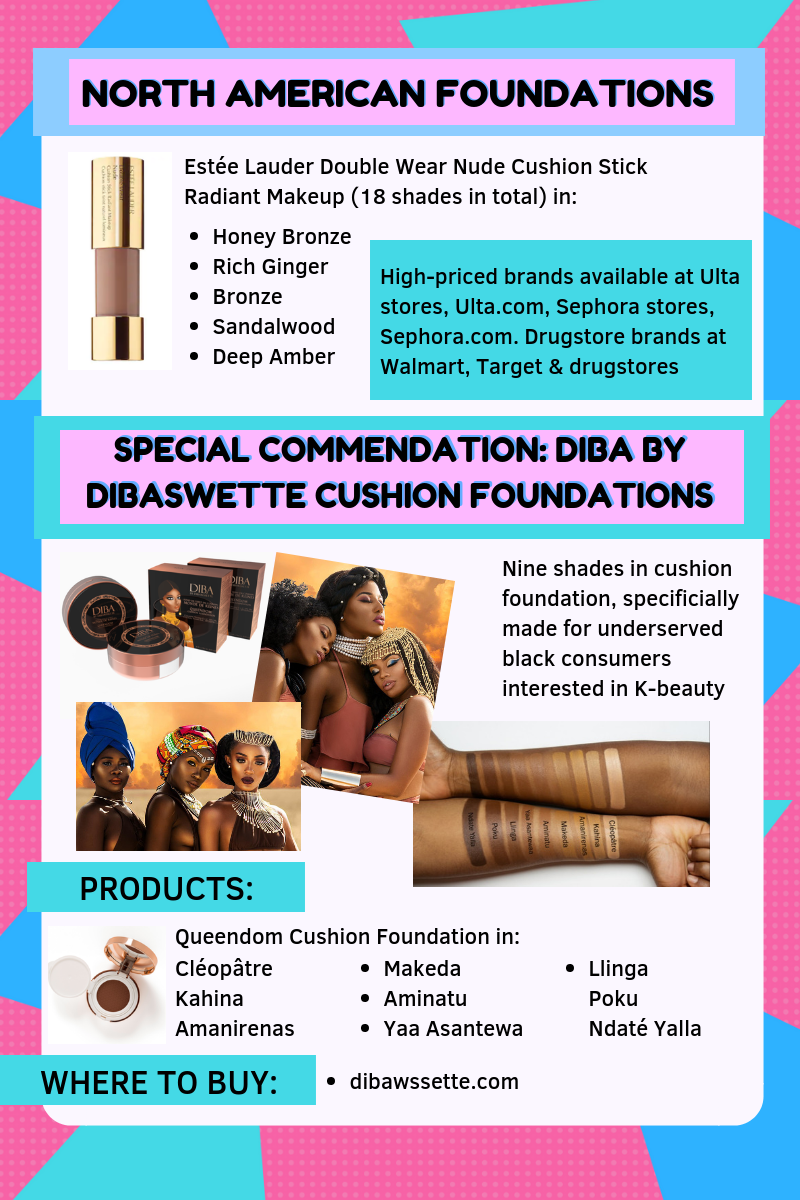 In short, while the state of skintones in K-beauty is still dire, all is not lost for the K-beauty fan of a darker hue. Whether you try a K-beauty brand or use a K-beauty inspired one by other international brands, you can find your perfect cushion foundation in your perfect shade.