“Solo: A Star Wars Story” continues the tale of brunettes in space in leaked teaser poster

The first teaser poster for Solo: A Star Wars Story has been released, and let’s just say the response hasn’t been overwhelming. Or at the very least, my response isn’t overwhelming. 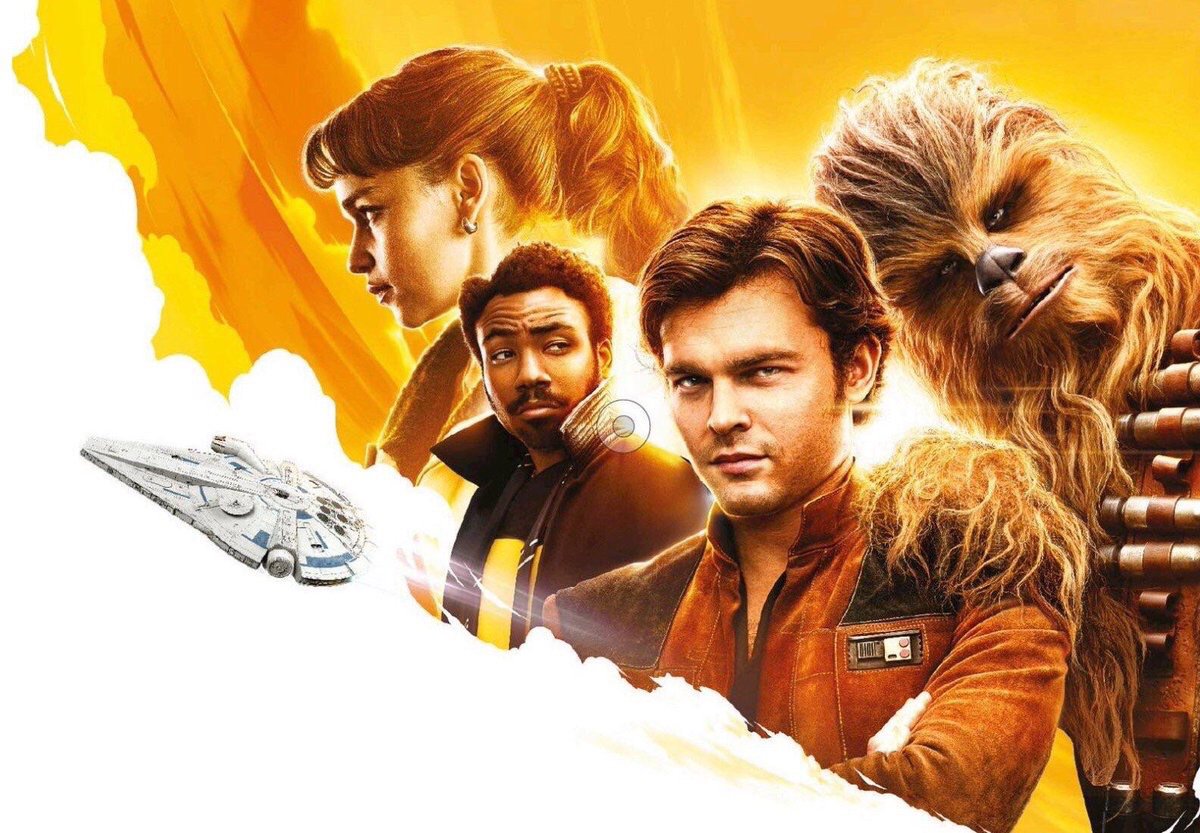 I’m not sure if it’s the Photoshop treatment, the color scheme (yellow’s not my favorite color), or just how the actors don’t really seem to be nailing their looks in this image, but the whole effect is just one that screams “This movie was salvaged.” Perhaps it’s also the background drama that’s surrounded this film, what with Phil Lord and Chris Miller being fired and replaced with Ron Howard.

You can read all about Lucasfilm head Kathleen Kennedy’s reasons for firing Lord and Miller here, but what it ultimately came down to was a lack of directorial leadership amongst Lord and Miller and a mismatch between Lucasfilm’s well-oiled machine way of doing things and Lord and Miller’s more improvisational style of directing. Innovation is great, but all that admirable innovation goes out the window if you’re someone who’s not a team player. But overall, I feel like Kennedy and Lucasfilm are probably viewing this film as the new Star Wars franchise’ first big bust.

Another thing that’s infuriating to the nth degree is how there’s another brunette woman in a Star Wars film.

With respect to Our Lady of Star Wars Carrie Fisher, we need to tally up the amount of brunettes there have been in this franchise, counting Emilia Clarke (who will play someone named Kira).

Now let’s count how many women of color have been in Star Wars leading roles, including Thandie Newton (who is in this movie as a main character, but that character is shrouded in secrecy–in this photo set, she’s shown in her role in Westworld). 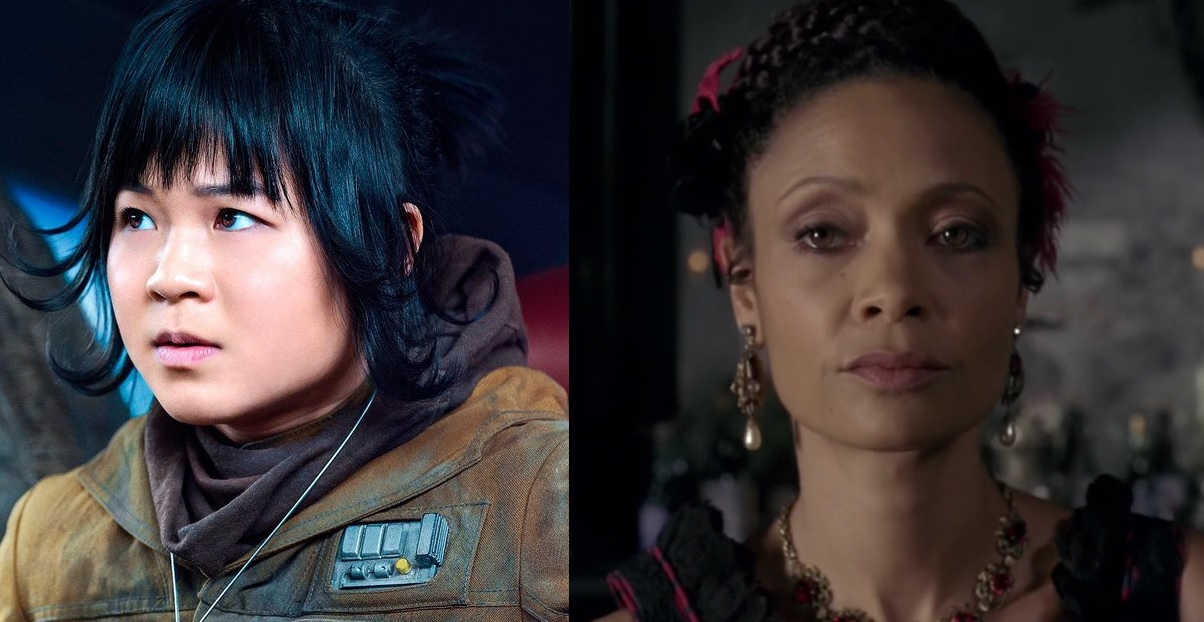 In short, that’s too many brunettes and too few WOC.

I’m quite sure there’s a reason Star Wars typically casts brunettes in their films; it’s to honor the first Star Wars brunette, Princess Leia. But that odd nod to Leia is only undercutting Lucasfilm’s focus to diversity. I’ve already written at length about Star Wars’ issues with WOC representation, and I’d basically be repeating myself, so I’ll just link my post here. Basically, the problem is simple: How can you have a universe full of aliens and creatures and not have a universe equally as full with people of color, especially women of color? To alter Whitney Houston’s famous lyric, It’s not right, and it’s not okay. But we’re gonna make it anyway (because that’s what women of color do).

There are two things that give me hope for SOLO: A Star Wars Story eeking out a minor win.

1. Lucasfilm do actually use WOC writers: As profiled by The New York Times, the head of Lucasfilm’s story group is Kiri Hart, a former TV and film writer and woman of color. Again, to tout Kennedy’s feminist-centric way of running Lucasfilm, Kennedy is the one who installed Hart in this seat of power.

Hart’s first act as story group head was to give female points of view a voice, and indeed she has. She’s also given women of color particular power in an industry that aims to silence them. To quote the Times:

“Today, the Lucasfilm story group is a diverse outlier in Hollywood: five of its members are people of color, and the team includes four women and seven men. This is a rarity in 2017, where women account for 13 percent, and minorities represent 5 percent, of all writers working on the top-grossing films. In addition to maintaining the continuity of the ‘Star Wars’ universe, they aim to increase its diversity.”

I don’t know if the casting branch and the writer’s branch work together at all—it can be hard to know exactly where one set of red tape ends and where another set begins. It’s also unclear if the casting decisions were left up to Lord and Miller. But regardless, hearing that there’s diversity behind the scenes gives me hope of seeing more well-rounded women of color grace the big screen soon. It also gives me hope that other marginalized people will be represented as well. You probably already know how much I talk about Stormpilot, and it’s for a reason; it’s because the LGBT community must be represented as well as women of color. Knowing that a diverse group is behind the Star Wars writing process gives added credence to Kennedy’s assertion that the fandom pairing is actually being considered as a legitimate avenue for exploration.

2. Thandie Newton is a main character; we just don’t know who she is: What has got some Solo followers upset is the rumor that several women of color tried out for Clarke’s role, with the role ultimately going to Clarke. What many WOC Star Wars fans hoped was that the role was Sana Starros, Han Solo’s former wife, and the worry is that Clarke’s role is of a whitewashed Sana. According to The Hollywood Reporter as of 2016, it’s unclear if Clarke’s role is actually the same one the other actresses—Tessa Thompson, Adria Arjona, and Zoe Kravitz—tried out for. Also, since Lucasfilm does have one of the most diverse writers’ rooms in Hollywood right now, one would hope that they wouldn’t make this kind of mistake.

However, we just might have our first clue as to who Newton is playing. In a September set photo featuring Newton and Howard, Newton is wearing a jacket with a mysterious-looking patch. SlashFilm’s Jacob Hall has surmised that the patch just might be an Imperial one, meaning Newton could be playing none other than Imperial naval officer Rae Sloane. If that’s the case, then Newton’s character will be a much-welcomed sight in the Star Wars universe.

@thandienewton returned 2 #TheGalaxy to light up some key new #UntitledHanSolo scenes then back to #Westworld. What a powerhouse talent! pic.twitter.com/3Toldp3UtK

Granted, there’s the critique that could be made that the first prominent black diasporic woman we’ve seen in a major Star Wars role is evil. But again, we don’t know who Newton is playing for sure. For all we know, she is actually playing Sana, who just happens to be wearing an Imperial jacket as some sort of subterfuge.

This was a lot of words on a teaser poster I hate, but there you have it. What do you think about Solo: A Star Wars Story? Give your opinions below!