Vanity Fair has released some special covers showcasing Star Wars: The Last Jedi and celebrating the 40th anniversary of Star Wars as a whole.

Apart from the lovely pictures featuring Gwendoline Christie as Captain Phasma and the especially commemorative one featuring the late Carrie Fisher as Princess Leia, this particular cover caught my eye. I’m sure you can guess why. 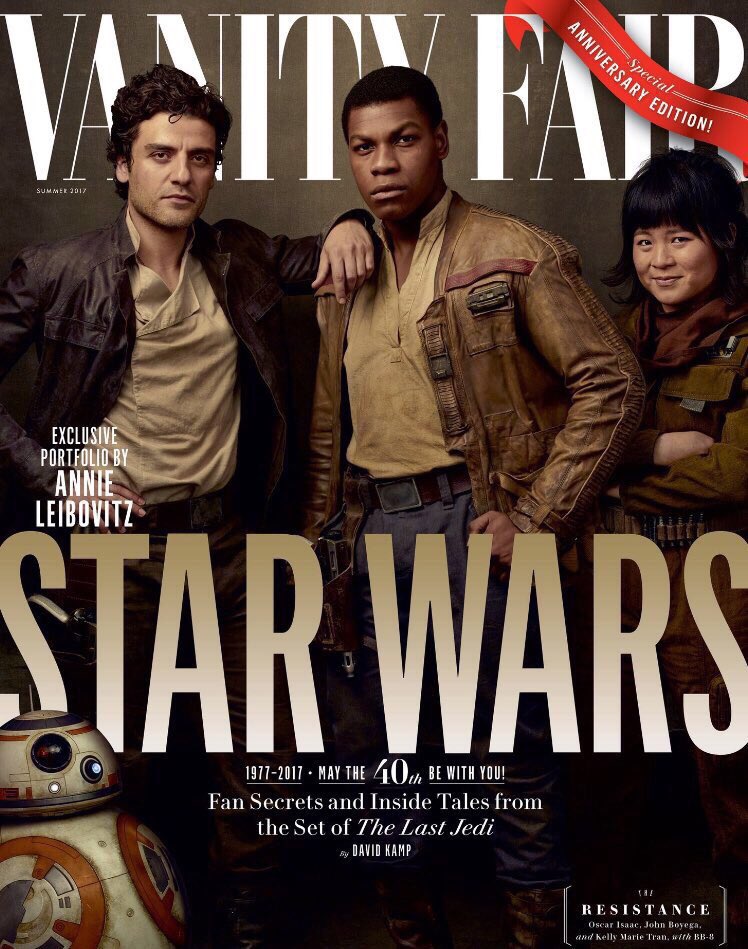 If you can’t here are three reasons:

1.  Multicultural outer space! It’s great to see what was once thought impossible–a full-on POC sci-fi moment. It is a special moment in time to have a magazine cover about a blockbuster franchise that features three people of color. As someone said online, it’s ironic that the “minorities” are also part of the Resistance, which seems to mirror what’s going on in American politics (and world politics) today.

2. The cover propels even more #Stormpilot theories. Now, this is both a plus and a minus since, as I’ve written on Tor.com, there’s something to be said about the amount of queerbaiting that’s going on (hopefully in one of these Star Wars films we’ll get some resolution on this, since they keep dangling it over fans’ heads). But as io9 has written, it’s fascinating that Finn is not just wearing Poe’s jacket; he’s also wearing Poe’s entire wardrobe. Meanwhile, it’s been pointed out that Poe is wearing Han Solo’s exact outfit, so maybe everyone’s just pulling a round robin on clothes. But in any event, a detail such as Finn’s clothes is bound to have fans salivating at the thought of FinnPoe being real. (Another thing that should have fans yelling at their screens: Poe’s arm placement on Finn’s shoulder.)

HISTORIC: Kelly Marie Tran is the FIRST Asian woman to appear on the front-page cover of Vanity Fair #StarWars pic.twitter.com/j0TeNvwVv4

Vanity Fair, come on now. You know better than this. But at any rate, congratulations to Tran for making history! Let’s hope she’s not the only Asian woman to grace the cover of Vanity Fair. It’s also good to get a good look at Tran as her character Rose Tico. She looks like she’s going to be tons of fun. (She could have been more front and center though…#justsaying)

What do you love about this cover? Give your opinions in the comments section below!