Michael B. Jordan Is Swoon-worthy In Pics With Lori Harvey. So Why Is He Not In More Romantic Movies?

This trait could be key to a lasting romance

So, what’s REALLY going on between Lupita Nyong’o and Michael B. Jordan?

The Last Jedi is dividing fans left and right (I’m on the side that happened to love the movie). Shippers of Stormpilot–the fandom (and cast-supported) coupling of Finn and Poe–are also divided on the movie as well, since not only was there a lack overt Stormpilot moments, but there was also a kiss between Finn (John Boyega) and Rose (Kelly Marie Tran). For some, it would seem the hopes for Stormpilot are over.

After seeing The Last Jedi myself, I’ve come away with the opinion that not only has Stormpilot survived the second act of this three-act story, but even more background information has been given on the apparently one-sided tension Poe’s wrestling with when it comes to his interactions with Finn. I posit that Poe is the one who is the one harboring an intense crush on Finn, while Finn is completely oblivious, focusing only on the mission at hand. 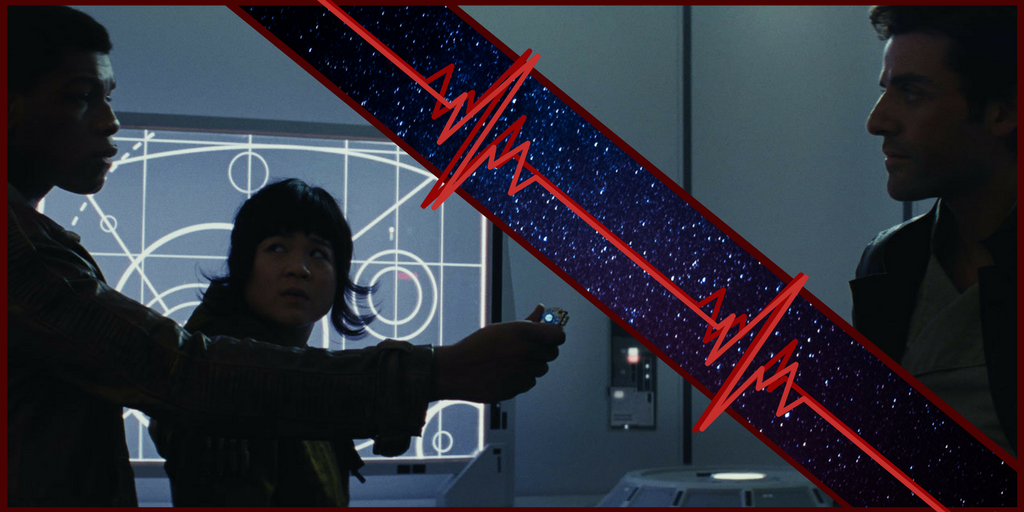 There’s a scene that seems to have escaped even the most hardcore of Stormpilot fans, and that’s when Rose and Finn are giving Poe their idea for saving the Resistance ship from the Empire. They’re talking to Poe in Poe’s quarters, which immediately gives Poe leverage over the entire scene. Poe and Finn are dominating the conversation until Rose chimes in, making herself known in an otherwise closed-off environment. That’s when Poe’s penchant for jealousy kicks in, and he pointedly asks Finn, “Where’d you find her?” Even though Johnson couldn’t find a way to inject full-scale romance in this film, he still found a way to inject an odd, jealousy-tinged line that doesn’t add anything to the scene, much less the film’s plot.

Throughout the film, we see how selfish, territorial, and jealous-hearted Poe can be when it comes to the people he loves. Poe would do anything for Leia–even after she slaps him like an angry mother, demotes him, and then tasers him so they can put him aboard the escape vessels without his backtalk. Leia is, in fact, the closest thing Poe has to a mother, and his loyalty and love for her makes him wary of anyone else who comes in between them. In this case, that person happens to be Vice Admiral Holdo (Laura Dern), whom Poe is immediately suspicious of. (Poe’s a little sexist about it too, to be honest, judging Holdo for being ultra-femme in battle, even though Leia is just as femme, just in darker colors.) He doesn’t learn to trust Holdo until the very end of their time together, and unfortunately, it’s while she’s sacrificing herself to allow the escape pods to advance to the nearest moon.

Poe’s selfishness and jealousy comes back in full force only one other time, and that’s when he’s sizing up Rose. Poe is visibly irritated he must share Finn with Rose, but he knows he has to do so if they’re going to save everyone. At one point, I thought Poe was going to say, “Maybe I should come with,” and to be honest, the look on his face gives the impression that he’s actually considering jettisoning the ship and stowing away with them. But he also won’t allow himself to leave Leia unattended. So he begrudgingly agrees to their tenuous plan.

Exhibit B: So much touching 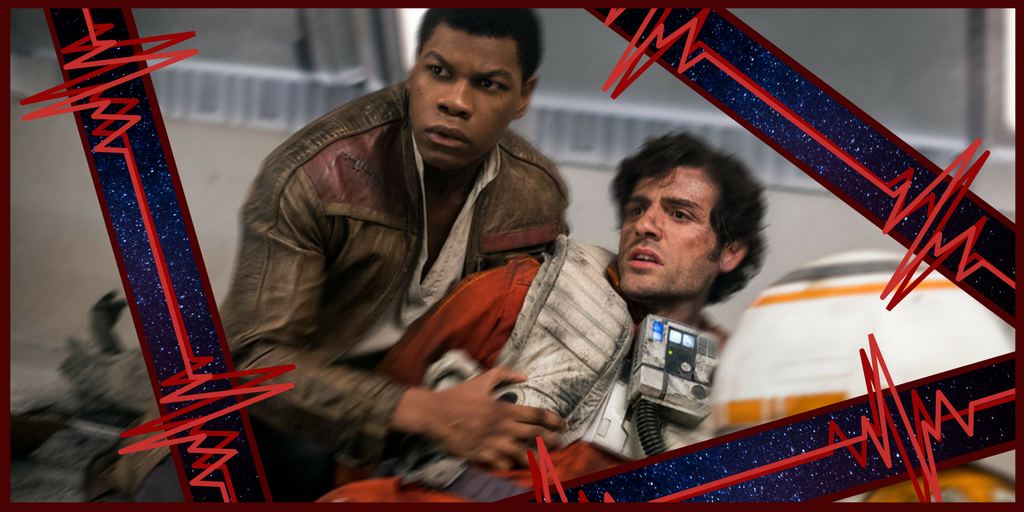 Maybe it’s because I already had my proverbial antennae up for any Finn/Poe interactions I could possibly write about later, but it seemed like there was a large amount of slightly unnecessary touching. (Full admission: the amount of touching might also seem unnecessary because I’m not that touchy-feely myself, despite being highly emotional. As I’ve written before, I’m a Vulcan.)

The first bit of touching comes after BB-8 alerts Poe to Finn waking out of his coma. The dialogue we hear–Poe repeating BB-8’s beeps about a naked Finn when Finn isn’t actually naked–is something to waggle some eyebrows at, since it’s erroneous and gratuitous. Another script Easter egg, perhaps. But after the dialogue comes Poe rushing to Finn, reaching out to both stop him and support him as he staggers out of sickbay.

Poe didn’t have to touch Finn at his waist. He could have easily touched him around the shoulders. But it’s less about where Poe touches Finn and more about how he touches him. Everything’s gentle, and it’s not just because Finn is literally leaking IV fluids. Whenever Finn is in Poe’s vicinity, Poe immediately reduces down into a much gentler, softer persona. And, as we saw with how pointed he got about Rose, that persona is reserved only for Finn, and anyone who encroaches on Poe’s territory sees a more crotchety side of our favorite pilot.

There’s another moment of touching when Finn runs to Poe, who’s just been blown back by an Empire explosion. This bit of touching can’t really be made into too much of a “Stormpilot” thing, since Poe literally just got blasted in the back and sent flying across the hangar. But still, it’s something to note, especially since the undoctored image from this scene looks like it could be edited into a romance novel cover.

Keep in mind that throughout all of these interactions, Finn doesn’t ever catch on that Poe seems to be holding onto some big emotions. Finn sees Poe as someone he can trust, most definitely, but love is the last thing on Finn’s mind right now. Finn comes from a life of war, and survival mode is what he knows best. But survival mode doesn’t allow for someone to think about long-sustaining romances. After what happens in Exhibit C, though, it seems like Finn will start thinking about more complex things like love. 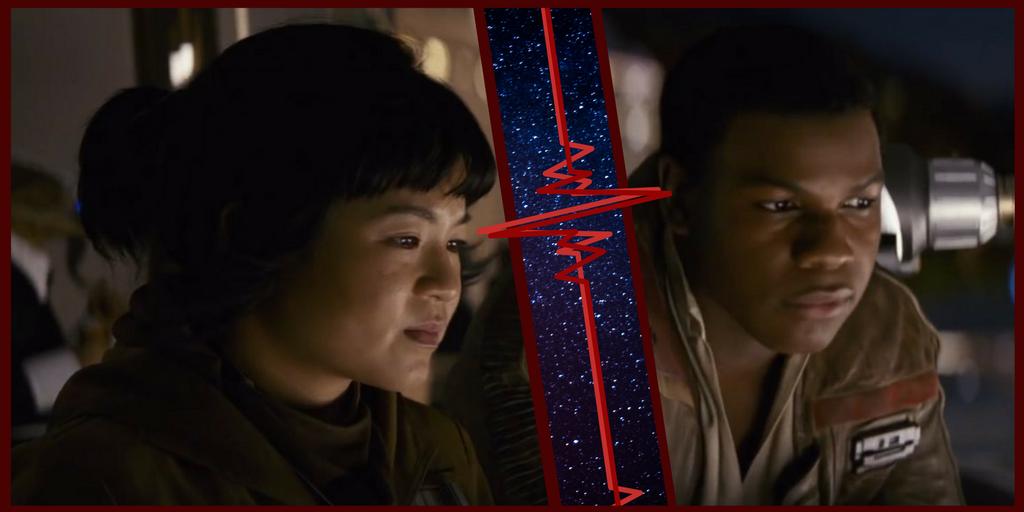 Let’s break down the scene where Rose saves Finn from his suicide mission. Rose gets injured in the process, and she tells Finn she saved him because this war is all about saving those that you love. She manages to give him a kiss before passing out.

Folks on Tumblr read this scene as Disney punking out to the international market, mainly China, who are seen as the gatekeeper on Star Wars exploring LGBTQ themes. No doubt that the international market can prove to be a roadblock for any LGBT representation in Star Wars, much less Stormpilot. But in actuality, no story commitment to a Rose/Finn romance has taken place. If the film was adamant about Rose and Finn sharing a romance, I would think that romance would have been hinted at throughout the film and, most definitely, Finn would have kissed back. But he doesn’t; he’s just confused. In fact, we leave him still in a state of confusion.

Star Wars doesn’t have a fantastic record of building up believable romances–even Han and Leia’s romance doesn’t have much of a build-up that allows someone to truly understand what they see in each other. But to The Empire Strikes Back‘s credit, at least they keep the romance up throughout the film. The film was committed to cementing Han and Leia’s romance by peppering it in all over the place. With the amount of amazing writing that acts as The Last Jedi‘s foundation, I’d think that if they wanted to give us romance, they’d do a heck of a lot more than give us one small kiss and a clearly one-sided exchange.

It’s also worth noting that the experience of kissing is new to Finn, regardless of if it would be with Poe or Rose. Poor Finn hasn’t had real human interaction for his whole life. I think it’s natural for him to be confused on a multitude of levels. First, he has to suss out if he feels the same way about Rose. Second, he’d have to figure out if he even likes kissing at all. This is where the sexual representation could become more complex than just the gay/straight binary. We don’t know what sexual orientation Finn has, but it might be narrow-minded us to assume that he’s just simply gay. It’d be great if Star Wars could explore Finn’s inner conflict surrounding this moment.

I’m not soothsayer—I don’t know exactly what this means for the next film. But as for this film, fans shouldn’t be too upset. Romance didn’t make its way in this chapter, but let’s hope that romance, especially LGBT romance, is a big part of Episode 9, whether that’s Stormpilot or otherwise.