Tag Archives: Once Upon a Time

If you’re like me, you probably zoned out on Once Upon a Time sometime between the second and third season, around the time when likeable Sheriff Graham/The Huntsman (played by Fifty Shades of Grey actor Jamie Dornan) was killed and when Cinderella’s fairy godmother was unceremoniously killed by combustion at the beginning of an episode (to this day, that still makes me mad).

After skipping out on the show, you might have still kept up with the goings-on through other folks’ recaps. While there were some cool moments, such as Mulan, played by Jamie Chung, being written as a bisexual warrior who was in love with Sleeping Beauty, a portrayal of Lancelot being played by Sinqua Walls, and the inclusion of Jafar, played by Naveen Andrews (in a very cheesy fashion, mind you), there was tons of awful stuff, such as the dire treatment of characters of color in general. As Stacy Whitman, founder and publisher of Lee & Low Books imprint Tu Books, wrote about the series:

“…I’m highly disappointed with how the show handles its characters of color. Have you noticed how many of them die or get locked away to be forgotten compared to other characters? Sidney (who disappeared to star on Revolution, never to be mentioned again); Tamara, Neal’s fiancée who was trying to sabotage magic and kidnapped Henry (who could as easily have decided to be good and joined up with their team, but no, just got killed off; granted, so did her white partner in crime); Lancelot, who is dead before we ever meet him.”

In the end, you realized you only stayed as interested as you did because of the only truly compelling character in the main cast—Rumplestilskin, played by Robert Carlyle, maybe one of the few actors of the main cast who understood how to play his role with equal parts cheeky camp and believable, emotionally-resonating seriousness.

However, with much of the original cast gone, either because they got tired of playing the characters or wanted to go on to different projects, is Once Upon a Time trying to capitalize on a demographic it misused and drove away by taking the story in a much blacker direction? Enter the new phase of Once Upon a Time, in which Henry, now a grown man, is besieged by a young kid much like how he ambushed Emma in the pilot. Henry has to now figure out how he could be a young girl’s father, even though he has absolutely no recollection of being a father to anyone.

First, let’s talk about the little girl. Lucy (Alison Fernandez) is supposed to be the daughter of Henry and Jacinda/Cinderella (Dania Ramirez). This Cinderella is different than the Cinderella I was writing about above—that Cinderella looked very much like the one we know from the Disney movie.

That leads to the next point: this will the second time we have seen Cinderella portrayed by a woman of color since Brandy’s turn as the character in 1998’s Rodgers and Hammerstein’s Cinderella for The Wonderful World of Disney. It also seems like Ramirez’s dress has more nods towards Brandy’s dress than the Disney cartoon character’s dress, which is interesting. 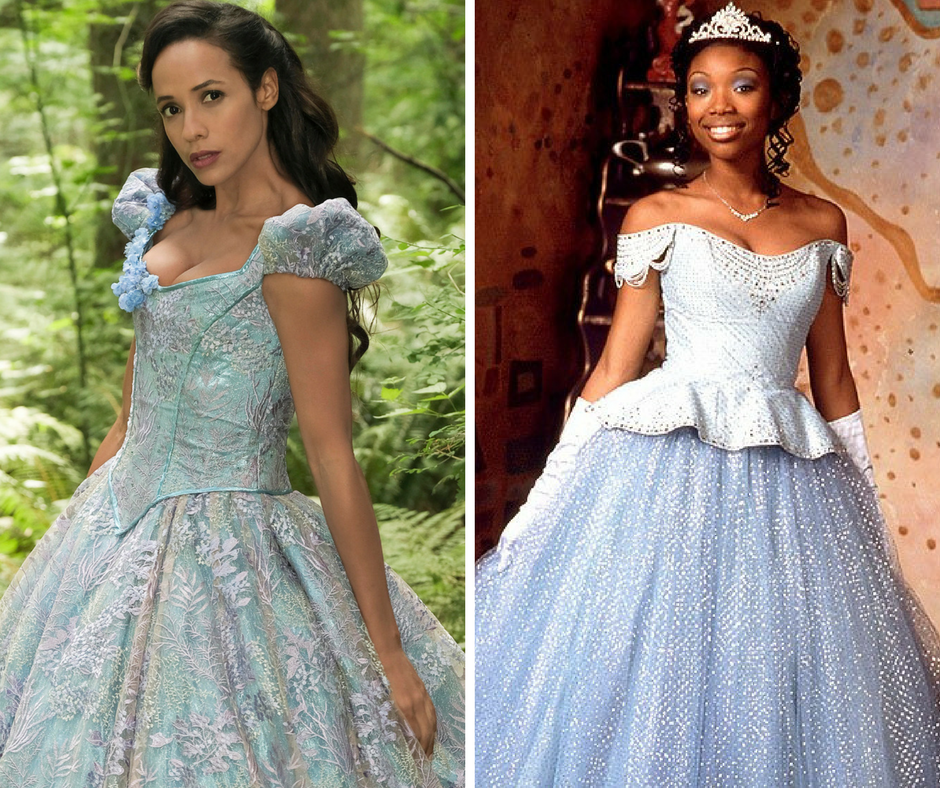 Compare that to the first Cinderella’s dress shown in that awful episode of Once Upon a Time, which has more nods to the cartoon character’s dress: 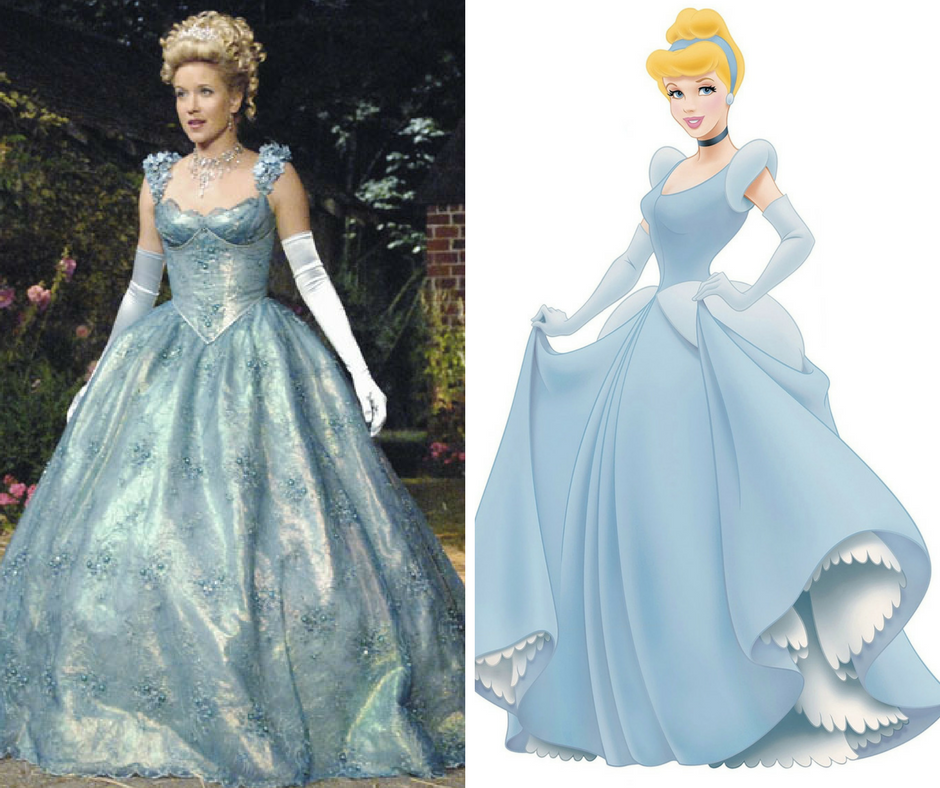 (Quite possibly, this was one of the worst episodes of OUAT ever, but it had some of the best costume/hair design ever…go figure.)

If they are making Ramirez’s Cinderella more like Brandy’s version, then maybe there could be something said about how the storyline is focusing on Henry being this kid’s dad instead of the storyline functioning as one that still required the use of Cinderella’s Prince Charming, who would be played by an Asian actor to correspond to the actor who played the Prince opposite Brandy, Paolo Montalban. However, the season isn’t out yet, so maybe there are some surprises in store. I’m always an optimist.

Cinderella’s stepmom Lady Tremaine is played by Gabrielle Anwar, probably best known for her role in USA’s Burn Notice. Anwar herself has Austrian Jewish and Indian heritage, adding to the amount of representation happening in this upcoming season.

Third big surprise—Princess Tiana is going to be a part of this season! Mekia Cox will be playing the character, and Robin Givens will play her mom Eudora. According to Shadow and Act via EW, Eudora won’t be a working-class woman, as she was in The Princess and the Frog, but “a loving mother to Tiana and benevolent noblewoman. Formerly wealthy, now facing financial disaster, she handles the transition with grace and inner moral strength.”

Once again, there’s a lack of a POC prince mentioned as part of the cast. Just like how Brandy’s Cinderella found love with Montalban’s Prince Charming, Tiana married Prince Naveen, a…vaguely beige dude. I say “vaguely beige” because we have no idea where Maldonia is, but we are led to assume that Maldonia’s not full of Anglo-Saxon people. Technically, if you looked at behind-the-scenes stuff, Disney artists fixated on Maldonia being somewhere in the Mediterranean, while Naveen’s name suggests that the culture and people of Maldonia are South Asian and/or Middle Eastern at the very least. I won’t get into my personal dissertation about why I both love Naveen (I mean, come on—he’s a hot guy and he’s a bad boy turned good) and have some problems with how Disney bent over backwards to not use this opportunity to create their first black prince ever, but suffice it to say, Tiana’s currently missing her Naveen, and this would be a great time to cast an actor of color—maybe an upcoming actor of color who needs that big break—in this role.

Another thing to look for this year—a prominent LGBTQ storyline. From the TV Guide video (below), I’m assuming it’s going to be a lesbian-centric storyline, but regardless, Co-EP Edward Kitsis has confirmed that the storyline is, indeed, happening. Will it be treated better than Mulan’s storyline? We’ll have to wait and see.

So that’s what we can expect this go-round in…the fictional area of Hyperion Heights, Seattle (that’s right—we’re not in Storybrooke anymore). Is the OUAT team being shrewd and capitalizing on the current wave of representation hitting Hollywood? Time will tell—if we see any of these WOC killed off or illegitmate reasons or if they’re treated haphazardly, then we’ll better understand the cut of this season’s jib. Until then, I can only say I’ll tune in to see if this season will draw me in just like the very first season of OUAT did.