For quite some time, fans of Harry Potter who are also fans of character diversity have championed a revisionist take on the popular J.K. Rowling characters. Technically speaking, hardly any of the characters are ever coded as being specifically “white,” despite many of the main characters being cast as white characters. Racial coding has a history of being played fast-and-loose in the Harry Potter fandom, with Blaise Zabini and Lavender Brown being drawn as both black and white characters until the film gave us the official versions of the characters (with Blaise as black and Lavender as white).  One of the few characters actually described by color in the books is Dean Thomas, who was described from J.K. Rowling’s own notes as a black boy. (It’s also worth noting that Rowling’s notes also had Thomas playing a much bigger role in the first book, acting as much a main character as Ron, Hermione, and Harry. It’s a shame he got scaled back so much.)

If you check out Tumblr, you’ll see tons of versions of a non-white Harry, non-white Hermione and others. Non-white Hermione pictures have become the most popular, because the initial description of Hermione in the books—as a girl with bushy hair—resonates not just with descriptions of white girls, but with black girls, Asian girls, Middle Eastern girls, Native American girls, bi-racial multiracial girls, and other ethnicities not listed. Basically, any girl with bushy hair could be Hermione, so why, some fans ask, is it simply assumed that Hermione is white? Enter Harry Potter and the Cursed Child, Rowling’s latest project. The new story is a two-part stage play that acts as the official sequel to the Harry Potter saga. The play has been making waves just because the unusual nature of it—when was the last time there was a stage production that acted as a sequel to a book and film series?—but now, it’s making history for casting a black actress as Hermione. 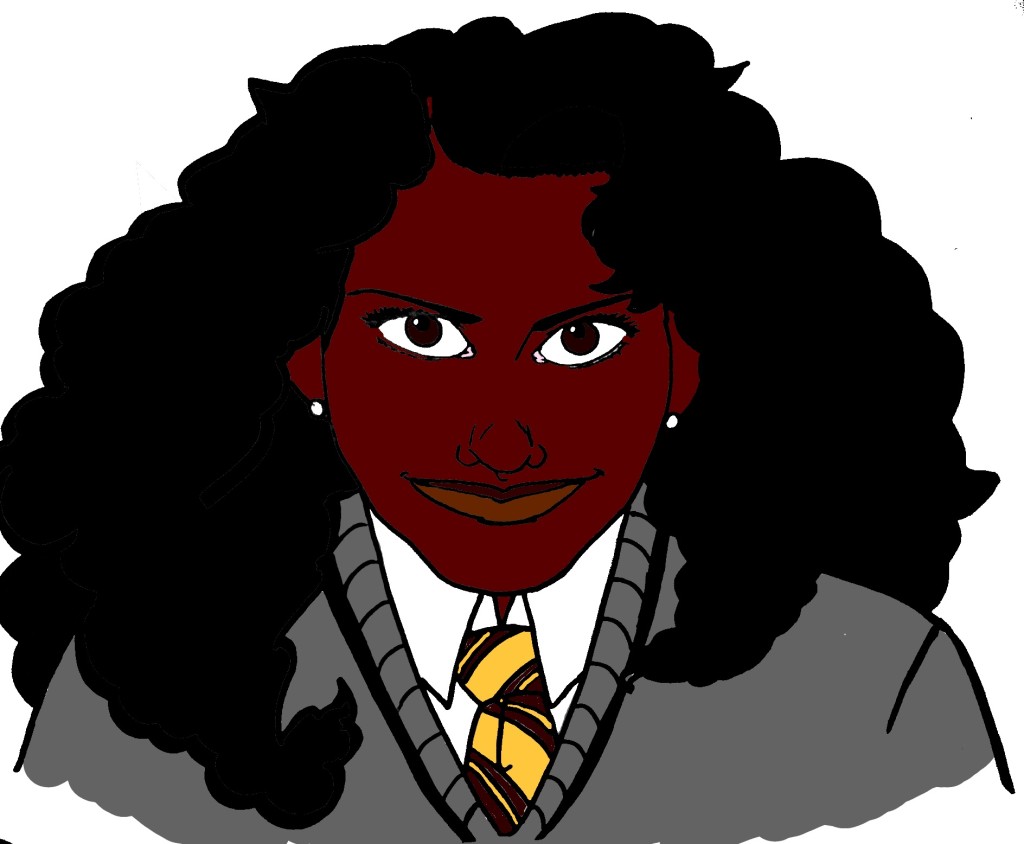 Noma Dumezweni will play an adult Hermione, many years after her teenage stint as a Wizarding World hero. Naturally, some fans took umbridge (get it? Harry Potter fans will get the pun) to Dumezweni’s casting because the casting went against the “continuity” of the franchise. But all fan reaction stopped once Rowling herself took to Twitter to tweet her emphatic approval.

Hermione herself, Emma Watson, recently tweeted her support of Dumezweni taking up the Granger mantle.

Matthew Lewis, who played Neville Longbottom in the films, also tweeted about how his character’s literary description doesn’t mesh with the film version, either.

And Neville Longbottom was blonde. I really don’t care. Good luck to her. https://t.co/0JNjK3Pe0V

As Vanity Fair states, the Harry Potter series is a big allegory for racism and racial politics, what with some wizarding families discriminating against others due to blood purity. “Rowling’s books were always clearly aware of the magic world’s version of racism, and even eugenics, where wizards of ‘pure’ blood were seen by some to be superior, and ‘mudbloods’ like Hermione had to fight against prejudice,” the site wrote. “So making Hermione a woman of color isn’t just O.K. based on the book’s description; it makes even more sense given what her character goes through.”

Still, there will be people irritated by a non-white Hermione. But ThinkProgress dug up this tweet from Al Jazeera America’s The Stream host (and esteemed lawyer and playwright) Wajahat Ali, which sums up everything that’s being forgotten by the fans who are mad at a non-white portrayal of the popular witch:

If White dudes can be Egyptians/Asians/Arabs/Latinos/Native Americans, then a Black woman can be #Hermione. It’s all good.

Harry Potter and the Cursed Child will open in London this July, with previews in May. Click here for more information and ticket prices.