As regular readers might know, I’m a resident of Birmingham, AL, so I’m quite stoked to finally feature someone from my neck of the woods who’s changing perceptions and challenging stereotypes. This time though, the playing field isn’t entertainment–it’s the world of beer.

Last month, I highlighted Viceland’s Beerland and its Alabama-centric episode featuring Birmingham home brewer Miki Jinno. Originally from Japan, Jinno’s foray into Birmingham’s home brewing scene has a charmingly Seinfeld-esque beginning–she regifted a present meant for her former father-in-law back to herself–and since then, she’s been on a journey to bring Birminghamians beer infused with a unique Japanese flair.

I interviewed Jinno mid-December after the Beerland episode to ask her more about her brewing, what inspires her, and where she sees home and craft brewing in Birmingham going in the future. As a home brewer, Jinno makes her brews for friends and family, but you can try Jinno’s beer each year at the Moss Rock Festival in Hoover, AL, about an hour’s travel outside of Birmingham.

I watched your episode of Beerland and I thought your approach to beermaking is really interesting especially since there are so many beermakers here in Birmingham; yours can stand out from the crowd.

I gave my ex-husband’s father a beer-making kit. He’s a scientist and my background is in science, too. I thought he would like it, but he didn’t use the kit. He just left it on the shelf. I didn’t want to waste the kit, and I was also interested in making beer. I started using that kit to make beer. But of course with a beer kit, you’re not [making great beer.] So, I changed all the ingredients to fresh ingredients, researched what kind of hops to use and fresh yeast to use to make a great beer.

You said in your episode that people didn’t expect someone like you to make beer. What do you think people expect when they think of a brewer?

A beer maker is usually big, has a beer belly. Beermasters, cowboy junkies—those guys are big, and they’re usually older. We go once a year to the Emerald Coast Brewfest, and we usually stay overnight with those guys and they’re telling me, “Hey, Miki, you’re too skinny to brew beer, you need more food.” In the first couple of months or more, I couldn’t really belong to those groups even though I brew beer. First, I’m a female and I’m relatively skinny, and I’m Asian. They think “Oh, you brew beer, but you don’t really get into it.” After they got to know me for about a year, maybe less, they start recognizing how I make beer. That broke the wall of the stereotypes of how they view me…It really took a while for the craft beer people to become comfortable because I’m not that guy that they’re expecting.

I’ve read about your infusion of your Japanese culture into your beermaking? How does your background influence your beer?

As a Japanese person, I have access to lots of Japanese ingredients. Right now it’s [about] Asian fusion—Asian fusion restaurants and ramen noodle places in Birmingham are becoming [more popular]. Everybody likes green teas and being healthy. I think as a Japanese person, I can bring something very unique to the U.S…It’s a great opportunity for me to put something in the beer to introduce people to something they’re unfamiliar with, like Japanese tea or Japanese citrus, which as a different flavor from American tangerines and stuff like that. Something like Yuzukoshō, it’s something that you’ve never tasted before, but I have because I grew up with it. Those little unique, great things are things I can introduce to American people.

As someone who has never had any kind of alcohol, what would be one that would be a good starter for me?

If you like tea, you definitely need to try my green tea beer, or another one I made with kukicha, another type of tea. You don’t taste any bitterness, only tea flavor. I also drop lemon into the beer, so it’s more like refreshing tea. Also, if you like coffee, I made a porter—imagine it’s a hot summer, and you have a choice to drink iced coffee or drink beer, but you want to drink both. So I made a coffee porter.

I’ve never thought about how many types of beer there can be, but this is really interesting.

Thank you. I’m a BJCP [Beer Judge Certification Program] judge, so I actually go to judge other beer at home brew competitions. We judge homebrew competitions everywhere, but I usually judge the Birmingham Brew-Off, Peach State Brew-Off, and Boardtown Brew-Off. Sometimes a brewery will invite me to taste their beer before they make a big batch. Going through this judging program, I learn [about] a ton of new beers, so many different types, so many different ingredients, it’s really interesting. It’s not the [usually] beer you think about—there are beers that taste like wine or taste like a scotch. There are so many kinds out there.

Where do you see Birmingham going in the next few years?

This interview has been condensed and edited for clarity.

I’m not a beer drinker. Actually, I don’t drink any alcohol. But if I did want to get in touch with my beer connoisseur side, it’s good to know there’s someone in my neck of the woods I can trust—Miki Jinno. She’s not only a Birmingham local, but she’s also got her own episode of Viceland’s travel/competition show, Beerland.

If you happen to be in Birmingham TONIGHT (Dec. 14), go to the Tin Roof (2709 7th Ave. S, Birmingham, AL) for the BEERLAND episode screening featuring Jinno. You can also meet Jinno at the meet-and-greet after the screening. The event lasts from 6 p.m. CT to 10 p.m. CT. 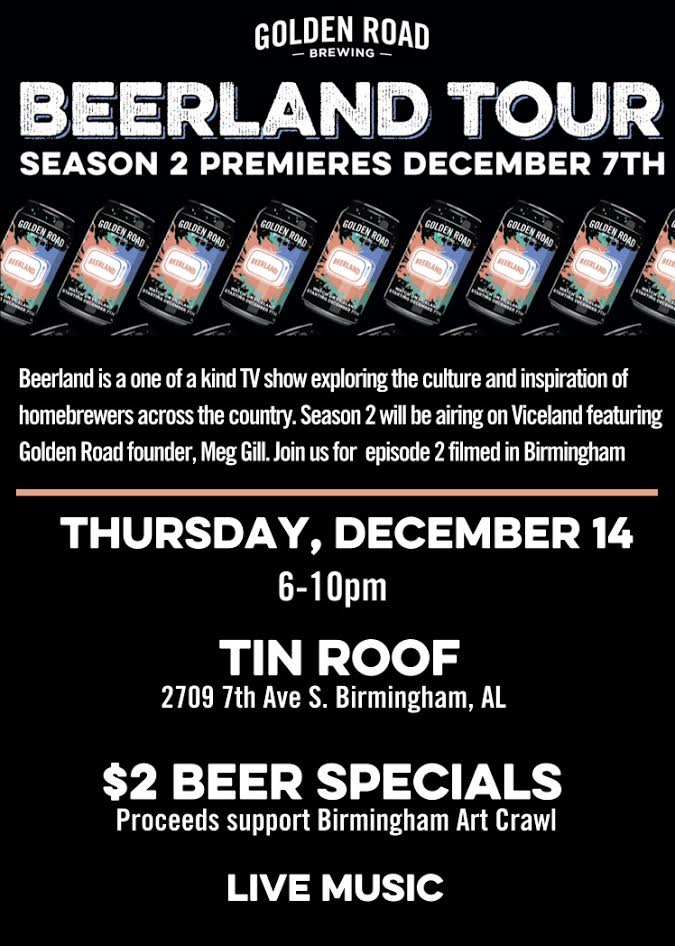 A native of Osaka, Japan, Jinno is one of the best local beer experts. Jinno is trained in traditional Japanese Princess Tea ceremonies he fuses Japanese culture and traditions into contemporary brews, such as beer infused with matcha.

For Jinno, the world of beer and brewing allows for people to connect in a different, and less divisive way. “When we’re discussing beer, we’re not discussing politics or religion,” she said.

In each episode, host and Golden Road Brewing founder Meg Gill visits a new city and learns about the biggest local home brewers in the area. She only invites just one brewer back to Los Angeles with her to participate in a final taste-off, a national distribution deal hanging in the balance. Will Jinno be the chosen one to represent the Magic City? We’ll see.

What do you think about Jinno and her multicultural beers? Give your opinions in the comments section below!