Netflix Acquires “Where the Road Runs Out”, First Film Shot in Equatorial Guinea

Netflix is trying to step up their movie game, and it would seem they are on the right track with their acquisition of Where the Road Runs Out. The film, directed by Rudolf Buitendach and starring Isaach De Bankolé, is a history making film; it’s the first film to be shot in Equatorial Guinea.

The film has impressed audiences across the indie circuit. As the press release states, “the indie has also won awards at Sunscreen film Festival, Helsinki African Film Festival, and has also featured and been warmly received at the Pan African film festival, AFI Silver and Heartland film festivals.”

The film looks like it’ll be one you’ll have to put in your queue when Netflix releases it next year. Take a look at the poster and the press release in its entirety below.

WHERE THE ROAD RUNS OUT, the first film to ever shoot in Equatorial Guinea, picked up by Fairway Film Alliance, has been acquired by Netflix for US and partial foreign (Canada, The UK, Australia, New Zealand and English speaking African countries) distribution. The film, which premiered at and won best narrative film at the San Diego film festival in 2014, is directed by Rudolf Buitendach and stars Isaach De Bankole, Juliet Landau, Stelio Savante and Sizo Matsoko.

SYNOPSIS: A Rotterdam-based respected scientist and lecturer (Isaach De Bankole) has grown weary of the world of academia. The sudden death of an old friend who has been running a field research station in Africa gives him the incentive he needs to turn his back on his academia and return to his African roots. Arriving in Equatorial Guinea he finds the field station in a state of disrepair. Through a local boy Jimi, his jaded eyes are opened to the possibilities of life there. Jimi also introduces him to Corina (Juliet Landau) who runs the local orphanage and a tentative but heartfelt romance begins. With the unexpected arrival of George’s old friend Martin (Stelio Savante), George discovers there are many obstacles on the road to redemption… and many more where the road runs out.

Lensed in Equatorial Guinea, South Africa and the Netherlands; the indie has also won awards at Sunscreen film Festival, Helsinki African Film Festival, and has also featured and been warmly received at the Pan African film festival, AFI Silver and Heartland film festivals.

NETFLIX is planning for an early 2017 release in the US, Canada, the UK, Australia, New Zealand and English speaking African countries. The deal was brokered by US Distribution/Production Company Fairway Film Alliance and Ocean Avenue Entertainment (Chris Bueno). 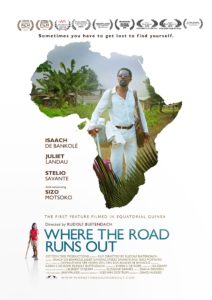