Can Issa Rae and Kumail Nanjiani Redefine Interracial Relationship Goals In “The Lovebirds”?

Trailer Talk: ‘Little’ Has Me Concerned, But It’s A Big Move For A Young Star

Issa Rae has several new HBO shows on the horizon, but there’s one I’m interested in the most—a black bisexual rom-com.

Him Or Her, executive produced by Rae and Travon Free (a writer for Full Frontal with Samantha Bee and former writer for The Daily Show) will be, according to Shadow and Act, a “single-camera half-hour” comedy that follows “the dating life of a bisexual black man and the distinctly different worlds and relationships he finds himself in.”

Shadow and Act is right in asserting that Him Or Her might be “the first television show to center the focus on a black, LGBT male since Noah’s Arc.” What’s also great is that much of the show will be based on Free’s own experiences as a bisexual man.

As Rae told The Huffington Post in an email, “I was immediately drawn in to the concept from his initial pitch and am SO grateful that he’s trusting us with his vision.” As reported by Logo, Rae also said she has wanted to bring bisexuality into the conversation about black masculinity.

What do you think about this show? Give your opinions in the comments section below!

There’s been a flurry of beauty and movie news that celebrates black beauty and talent! Check it out!

Aja Naomi King is the new face of L’Oreal Paris. According to 21Ninety, King, who is best known for her work on ABC’s How to Get Away with Murder, will start her ambassadorship with the True Match Lumi Glow collection.

“Gratitude can’t begin to describe this feeling inside,” she wrote on Twitter. “No words can capture it…but I hope to be one more face looking back at you showing you what IS possible!!!”

Gratitude can’t begin to describe this feeling inside. No words can capture it…but I hope to be one more face looking back at you showing you what IS possible!!! Honored to be part of the L’Oréal Family ??? #lorealparis @lorealmakeup

Girls Trip has put comedian Tiffany Haddish on the map, and the Oscar buzz surrounding her performance isn’t just hot air. Haddish has been named this year’s Best Supporting Actress by the New York Film Critics Circle. According to Vanity Fair, Haddish beat out other awards contenders such as Lady Bird‘s Laurie Metcalf and I, Tonya‘s Allison Janney.

“Though the New York Film Critics Circle is an insular voting body that doesn’t overlap with those who pick contenders for ceremonies like the Golden Globes and the Oscars,” wrote Yohana Desta, “it seems likely that her buzz, newly bolstered by this best-supporting actress award, could reinvigorate voters in other groups to throw their weight behind Haddish.

Her collection, Melting Pout Metallics, features eight metallic lip shades, and these aren’t your average shades. With colors ranging from blue (“Sunday Blue”) a cool gray  (“Platinum Card”), vibrant purple (“Amped”) to a liquid gold (“Banger”), there are shades for even the most adventurous lipstick wearer.

Who knew Twitter would turn into the next Hollywood casting office! It’s amazing that this tweet about the two stars at a 2014 Miu Miu fashion show:

Rihanna looks like she scams rich white men and lupita is the computer smart best friend that helps plan the scans https://t.co/PhWs1xd3nj

Exclusive: It's happening! @Rihanna and @Lupita_Nyongo will LITERALLY costar in a buddy movie by @Ava DuVernay: https://t.co/Mz8k2cT5fH pic.twitter.com/Xev716aLt5

According to Entertainment Weekly:

After a dramatic negotiation session at the Cannes Film Festival, Netflix has nabbed a film project pairing Grammy winner Rihanna with Oscar winner Lupita Nyong’o, in a concept that began as a Twitter sensation. Ava DuVernay (Selma) will direct, and Issa Rae (Insecure) is writing the screenplay.

According to sources, Netflix landed the project in a very aggressive bid, beating out multiple other suitors.

The film will go into production in 2018 after DuVernay finishes her latest project. I, for one, is excited for this film and I can’t wait to see it when it comes to Netflix. Twitter–particularly #BlackTwitter, which started the whole movie talk–is excited, too:

The Rihanna and Lupita Nyong’o buddy movie is actually happening

. @ava hey, can @violadavis be the mentor who helps @rihanna and @Lupita_Nyongo scam rich white men!?!?

Bring @joanneprada to show the characters how to scam, in the movie. ??

I need Lupita and Rihanna to scam Casey Affleck in this new Netflix movie.

Can @tonygoldwyn be one of the rich white men that they swindle? @ava https://t.co/A345Xe4EpL

Since this is a real thing now, @ava I GOT YOU! https://t.co/4ZtrlVtYwE

I nominate this as the song that plays as Rihanna & Lupita walk away from their first heist. @ava https://t.co/N92QRIS1DK

Hey @ava if you and Issa are looking here's a few seasoned white men for Riri and Lupita to scam out of them coins pic.twitter.com/Vaot2b8Njy

As Shadow and Act brought up, the big question is whether the person whose tweet originated this idea will get paid. “This could be one of those precedent-setting situations,” wrote Shadow and Act’s Tambay Obenson. If there is payment on the way, that means that the floodgates have opened for tons of films coming from Twitter, with tons of creators getting some steep royalty checks.

What do you think about this film? Give your opinions in the comments section below!

#YourBigBreak: Is Your Web Series a Fit for Issa Rae Productions?

One of the most common things in the media is the focus on the difficulties finding opportunity. Much of this is on Hollywood’s end, what with its bad, antiquated, stereotype-steeped practices. But a lot of difficulty also comes from not knowing where to look, for from people not giving others a leg up. Here at JUST ADD COLOR, I’ll do my best to highlight opportunities for those who are looking for that big break. This article is highlighting just one of those opportunities.

Issa Rae made a name for herself with her hilarious The Misadventures of Awkward Black Girl web series, and now her production company, Issa Rae Productions, is looking for new talent. Check it out: 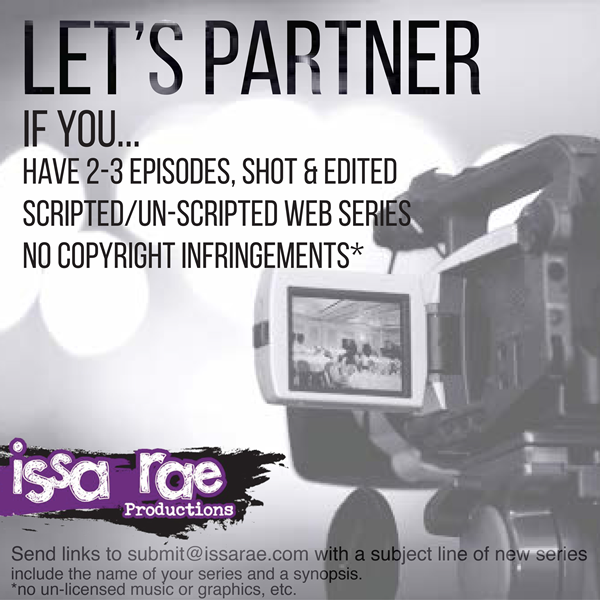 Good luck to all who apply!