JUST ADD COLOR is in the process of growing in 2016, and one of the ways we’re doing that is by creating COLORBLOCK Magazine, a monthly magazine that features more of the content JUST ADD COLOR has already—analyzing how race and culture are perceived in entertainment, and how those messages affect how we see ourselves. 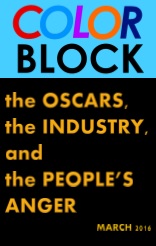 Here’s a bit from one of the magazine’s articles, “Lesson Providers and Tragic Figures: How The Revenant Reflects Hollywood’s Objectification of Characters of Color”:

Would you believe that Oscar film The Revenant has something in common with No Escape? Even though the film has been praised for its technical prowess and stellar acting, the Leonardo DiCaprio starrer has been called out on the story still following an old Hollywood trope: having a story involving non-white characters revolve around white leads.

Gyasi Ross wrote for The Huffington Post that the DiCaprio’s lead time in the movie could have been ceded to some of Native actors in the film. Comparing DiCaprio to Marlon Brando, who allowed Sacheen Littlefeather to speak to Native American sentiments at the Oscars, Ross wrote, “it would have been cool if [DiCaprio] surrendered that space for Native people to have some agency.”

Ross goes onto say that while The Revenant successfully strove for historical accuracy, it doubles down on the “white savior” trope that plagues many Hollywood films.

You can read the latest issue by clicking the link in the sidebar as well as clicking right here. You can also read past issues in the archive. If you love what you’ve read, make sure you leave me a comment, either on Twitter @moniqueblognet and @COLORwebmag, Facebook, or at ISSUU and share with your friends! These people did:

If u wanna know abt #diversity in #media but ur not reading @COLORwebmag ur doing it wrong. https://t.co/vCpgOhqi7M pic.twitter.com/rI3KrGoK0D

@COLORwebmag @issuu @Autumnmeowxo I thought you may enjoy this article and new e magazine. #COLORBLOCK a new must read. ?????

I’d love for you to read, share, and support!

Welcome to 2016! JUST ADD COLOR (originally known simply as COLOR) has seen its first full year in operation, and to head into its second year, there seemed to be no better way to ring in the new year than with a brand new magazine. COLOR BLOCK Magazine aims at giving you even more quality content, available for free download.

This year, JUST ADD COLOR will give viewers tons of content, lots of fodder for discussion, and hopefully it’ll give you some new ideas for how you think about the state of race and culture in entertainment. It’s not traditionally thought of as a “civil rights” issue, but representation in films and movies is, in fact, a civil rights fight. I’d say its one of the biggest, yet most underrated, civil rights fights, and the more people we have educated about the importance of representation, the faster we as a society can move towards an future in which everyone can see a version of themselves on television.