2018 Fashion: How to walk into the “Black Panther” screening in style

Somewhere on Twitter, there’s someone saying how they’re going to show up to the movie theater once Black Panther is released. When the trailer dropped in June, everyone was talking about how they were going to be decked out in their finest threads to see Black Panther, as if the February 2018 release date will be Easter Sunday.

But what could go into the sartorial display folks might (and probably will) partake in once the film drops? How does one show up to the movie theater to watch the most anticipated, most-hyped, and most-loved history-making Marvel film of all time? Look no further than to the Black Panther trailer itself, which gives you looks and inspiration for days.

Black Panther would be nothing without its adherence to pan-African tribal styles. Black Panther costume designer Ruth Carter said to Elle that she looked to several cultures for the look seen in the film.

“I’m looking at the whole continent and a wide range of people, like the Masai and the Suri. It all becomes a part of the framework of Wakanda. Most people who read the comic books know Wakanda is a mountainous area; it’s a secret place that’s not necessarily trading and interacting with the rest of the world. They’re a little bit more advanced in technology than other civilizations. We are creating that world, and trying to create a culture and pride that feels authentic to the specific location.”

Check out these scenes from the trailer juxtaposed with actual pictures of the Suri and the Masai people. 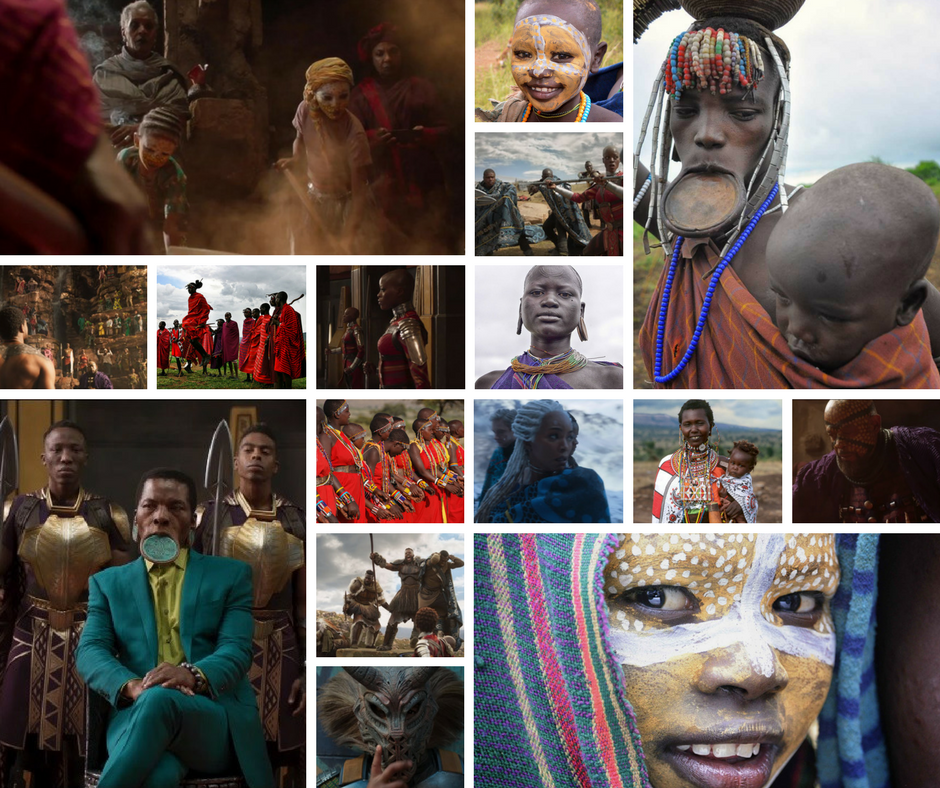 Now, I’m not suggesting you go to the film heavily appropriating cultures by wearing facepaint and Masai warrior tunics, because even though we’re black, we’re not of any of these tribes from a cultural standpoint (from a DNA standpoint, who knows). If you are from an African nation and you’ve got some stuff you want to pull out to roll up at the theater in, be my guest. For the rest of us black Americans, perhaps the best we can do is Kente cloth, which has become a part of African-American life ever since it was introduced to us back in the 1950s. As James Padilioni, Jr., of the the African American Intellectual History Society (AAIHS)-run site Black Perspectives, writes:

Kente appeared on the radar of most African-Americans in 1958 when Kwame Nkrumah, the first prime minister of independent Ghana, wore the cloth to meet with President Eisenhower at the White House. Coinciding with the Civil Rights and African Decolonization Movements, Black Americans associated Kente cloth with Black politics and the dignity of the African heritage. By the early 1970s, the predominant garment featuring Kente in the United States was the dashiki, a long tunic-type shirt that grew increasingly popular and commodified by the fashion industry.  Kente’s appeal within Black Power waned, with Fred Hampton and other Panthers leadersderiding those who wore them. Nevertheless, Kente cloth and dashikis remained staples of urban Black life and received a new layer of significance when adopted by the Hip Hop community in the 1980s.

While this is still a little bit of appropriation, the Kente cloth has taken on a very American-specific identity along with its traditional identity. At some point, many a black person has owned an item of clothing made from Kente cloth. Even I, as a kindergartner, made a cardboard doll wearing a Kente cloth dashiki and hat. I’m no sartorial police, but if you happen to have a Kente cloth shirt, hat, or even a scrunchie, wearing it to the Black Panther screening might be one of the best times you could put that item to some use.

The film referred to the most when writing about Black Panther on Twitter is Coming to America. The comparisons are coming even heavier now that there’s official news there will be a Coming to America sequel. It makes sense–both films are about fictional African nations, both films act as uplifting and positive portrayals of Africa, and both films have become cultural touchtones to black American pop culture (even though Black Panther hasn’t even come out yet).

What if in the movie Black Panther, they run into King Akeem ruler of Zamunda? Coming to America crossover. #blackpanther pic.twitter.com/PFzNLGXJcd

This mashup of African aesthetics just made me realise Black Panther is like our generation's Coming To America sci-fi reboot https://t.co/wpVxqZNF1e

If they could somehow get this to crossover into the Black Panther world that'd be amazing. https://t.co/nCJowRIi4O

*writes down in note pad* Today I learned Black Panther is a fan of Coming to America and uttered these exact words in this panel. pic.twitter.com/YfFAG2xYuE

This is dope! Coming to America / Black Panther mashup. pic.twitter.com/sHUrqdNRtO

What y'all wearing to go see Black Panther movie?
Me: pic.twitter.com/aEGwoO1QBu

Fashion-wise, does it make sense to connect Black Panther to Coming to America? Sort of. The two films have different tones they’re trying to accomplish with their costuming. However, the common thread is the goal of making an African nation look like the ultimate African nation–regal, luxurious, sophisticated, and welcoming.

Upon taking apart each film’s costumes, it becomes surprisingly apparent that there are some similar elements in the costuming for Coming to America and Black Panther, such as the Dora Milaje wearing red, which is similar to how the royal handmaidens wear red. There’s also a certain use of furs, bright colors, and headdresses that convey the idea that these nations are not to be trifled with because they will outspend you and out-culture you.

Granted, the connective tissue between these two films is small–the main reason people are drawing parallels to the film is because Coming to America is the only film black Americans have that depict an African nation as thriving, rich, culturally-independent, and on-par with (or exceeding beyond) the European status quo. This gets into a representation issue–if there were more films about Africa that didn’t depict the continent as poor and backwards, then we’d have more films to choose from when discussing the place Black Panther has in Hollywood’s film legacy. 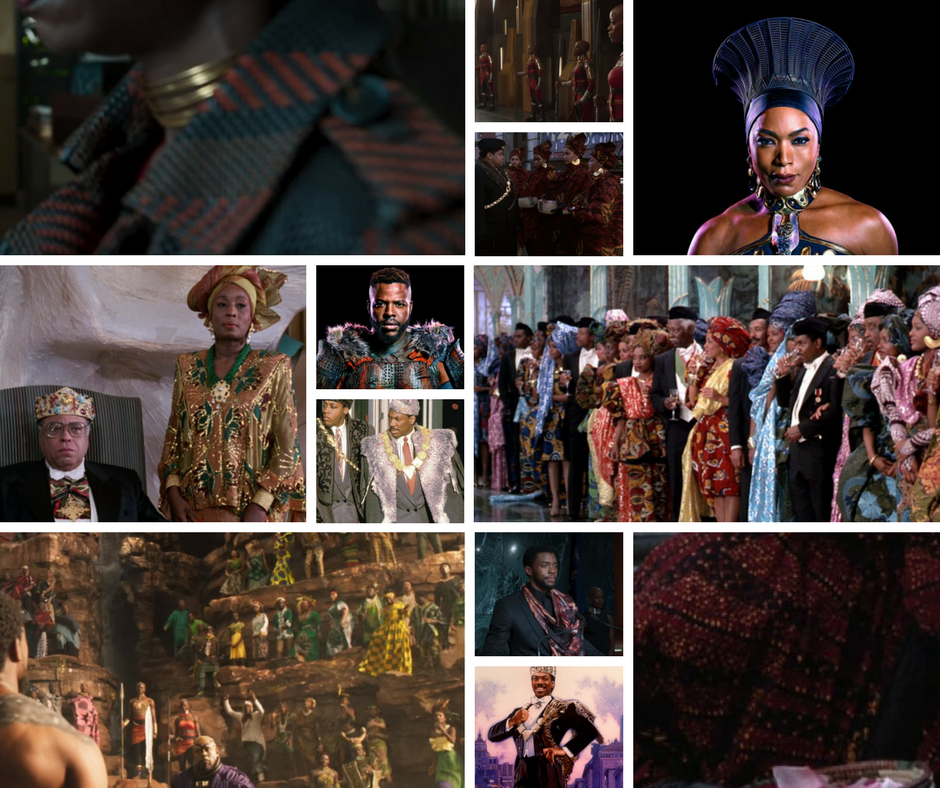 I would love to see folks at the theater in Coming to America cosplay. Usually, I hate seeing cosplay when I’m at the movie theater, but for this, I would pull out my phone for to take some pictures. Especially if someone decided to show up wearing a fake lion stole.

If you’re planning on going to the Black Panther premiere in supreme style, then you need to get yourself some Ikire Jones. The brand, led by creative director Walé Oyéjidé and head tailor Sam Hubler, weaves together African textiles and modern, urbane chicness into some of the most fabulous scarves and garments I’ve seen in a while. To quote the brand’s website:

We use design as a vehicle to tell stories that illuminate the nuanced lives of marginalized people. We do so without reproach or pity. But instead, by showing that elegance is not exclusive to any particular culture, hue, or country.

It seems natural, then, for Ikire Jones to be showcased in Black Panther as part of T’Challa’s regal wardrobe. As Oyéjidé said to OkayAfrica, the film will give audience members a gateway into thinking about Africa in a new way.

“I think the beauty of Black Panther, is that even though it’s fantastical, it at least opens people’s minds to the idea that people of African descent can be villains, they can be superheroes, they can be rich they can be poor. They can be whole, complicated humans and nuanced, just as people are from other heritages. So, it really is just about cracking open the door and seeing us as equal to everybody else. I think that’s what a lot of us are trying to do with our art in different ways. It happens to be a film, I happen to be a person who makes clothes, but uses clothes as a vehicle to talk about these things. We’re all basically working on the same issue, just in different ways.”

It’s not really in the trailer much, but there is one moment where black dandyism comes to play. That’s when the elder wearing the green suit shows up.

This moment made me think of one of the foremost people in black dandyism in pop culture, Jidenna.

The power of black dandyism comes from taking the colonizers’ clothes and culture and turning it into yet another tool to subvert white control and re-establish black humanity.

Shantrelle P. Lewis, the artistic curator behind Dandy Lion, an international exhibition and platform showcasing the world of contemporary black dandyism, wrote for How To Get Next about the relationship blackness has with fashion, both as a cultural artifact and as a political weapon.

Black people’s relationship to the sartorial, or sewing and tailoring, actualy predates contact with Europeans. We were some of the first, if not the first group of humans, to sew…So, when African tailors came into contact with European fashions, the blending of styles and culture gave way to a new look.
…Over the past couple hundred years, this art of mixing and matching is a skill that many Black men have manipulated to their own advantage to subvert mainstream racist images. Defiant dressing and oppositional fashion, or using fashion and style to subvert social-political norms, have a long history among Black people in the West–we’ve been using it as an instrument of resistance for 400 years.”

That power can certainly be seen in the elder’s sartorial choices–mixing brightly-colored, tailored pieces with a traditional, yet matching, lip plate. The same type of suiting can be seen on Jidenna, carrying the tradition of black dandyism into a new generation of “Classic Men.” 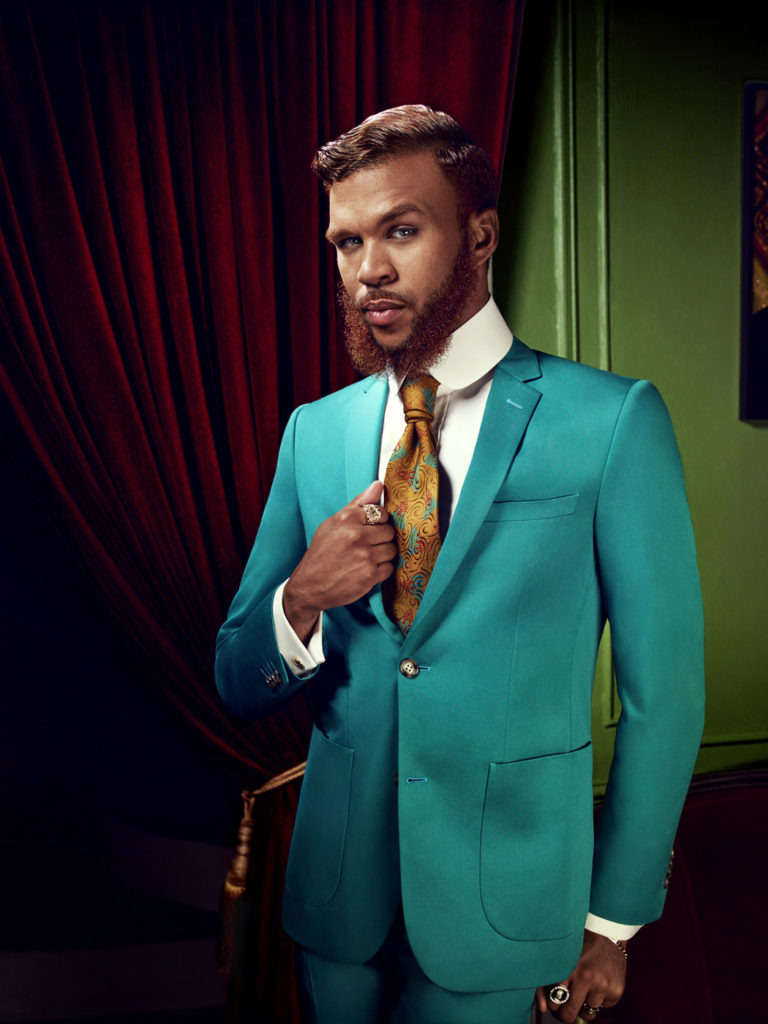 Jidenna’s black dandyism also makes sure to weave in African textiles and patterns, reflecting Jidenna’s Nigerian background. If you want to arrive in style at the Black Panther screening, try the dandy route and wear classic cuts mixed with traditional prints and statement colors. Back in New York for the most important meal of the week. Brunch is happening with #DandyWellingtonBand today 11:30am-4:30pm at @HotelChantelle! Come by and say hi. ? @JuliaBahlsen 35mm film

How do you plan on dressing to attend once Black Panther premieres?