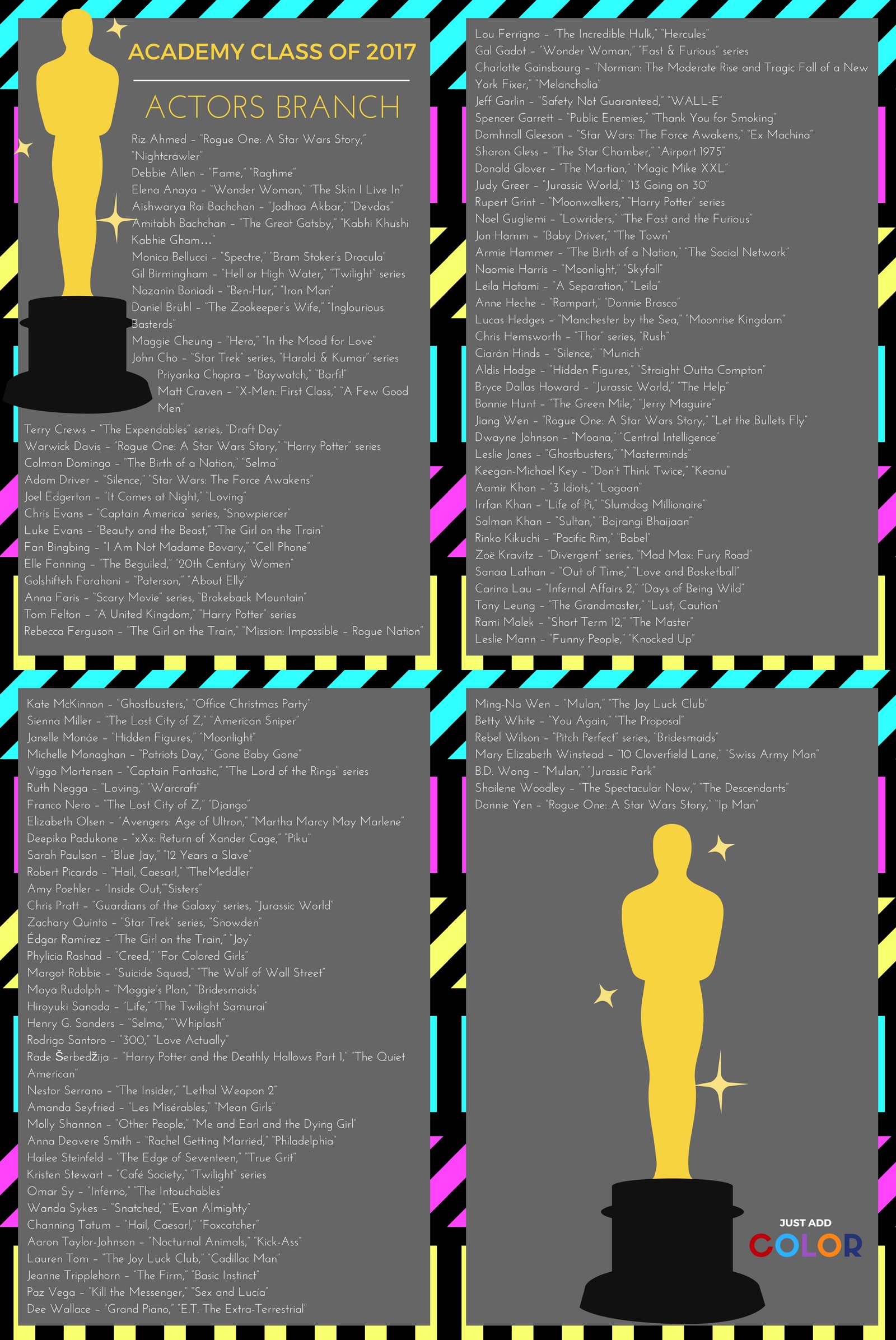 (For the full list of new members from all branches, visit Oscars.org.)

According to the Oscars’ stats, the new members hail from 57 countries and are 39 percent female, with seven of the branches inviting more women than men. Thirty percent of the new members are also people of color.

This is a vast improvement for the Academy, especially taking in where the organization was about a year and a half ago, with threatened boycotts and outrage over the lack of minority-led Oscar nominated films. Fans had utilized April Reign’s hashtag #OscarsSoWhite to voice their anger, and the Academy has taken meaningful steps to respond, first by adding more members from various backgrounds last year, and now this new batch of members this year.

Of course, even though these numbers are huge steps in the right direction, there are some gaps that need to be filled. Such as there aren’t many listed who are also disabled. I say “many” because there could be people with invisible disabilities, such as mental illness, that are listed. As of my review, I only see one actor with a physical disability, Warwick Davis. The focus for the Academy right now is purely on gender and race demographics, but it’d be great to see the organization focus on disability demographics as well, since it might spur the organization to recognize films that feature actual disabled actors.

Also, there aren’t any Native actors listed and there’s very little Latinx and LGBT representation as well. Bigger gains could be made on these fronts. But on the whole, this fleshed-out Academy voting board will benefit both the Academy itself and movie goers, despite the opinion of one Scott Feinberg of The Hollywood Reporter.

Usually, I refrain from jumping on fellow movie critics and analysts, since oftentimes, we are getting paid for our opinion, and an opinion is something that you can either agree with and support or disagree with and turn the other way. However, for Feinberg’s analysis about the new batch of voters, I have to make an exception for.

Feinberg’s initial point—that jamming the voting board with more actors might seem more like a vapid political move to avoid bad PR—is rather innocuous by itself. You can either take it or leave (and even as an innocuous point, I would leave it because of the positive impact any move, including ones that could be seen as vapid and political, could have on the poor state of representation in Hollywood today). But what gets more intolerable is how aggressive Feinberg becomes in discrediting the actors who got the invite.

I hate to single anyone out, but I don’t even think the people who I am going to reference would argue that they have had the sort of film career that already merits an invitation to the film Academy. Let’s start with this year’s invitees to the acting branch, whose names are the most familiar to the general public. Wanda Sykes? Zoe Kravitz? Terry Crews? Really? Some have made only one big-screen contribution of any note, such as Wonder Woman‘s Gal Gadot. And many are predominately known for their work on the small screen: The Night Of‘s Riz Ahmed, Atlanta‘s Donald Glover, Underground‘s Aldis Hodge, Saturday Night Live‘s Leslie Jones, and Kate McKinnon, The Cosby Show‘s Phylicia Rashad, The Golden Girls‘ Betty White and Mr. Robot‘s B.D. Wong (I have similar reservations about several white male invitees, as well, such as Mad Men‘s Jon Hamm and ex-bodybuilder Lou Ferrigno.)

…None of this is intended to insult the talent and/or doubt the future potential of any of these individuals, but rather to examine and question what the Academy is trying to do here. I believe that the Academy’s intentions are admirable, but that its tactics are foolhardy. The bottom line is that the Academy cannot fix the industry’s diversity problems any more than a tail can wag a dog. This is not a problem that can be reverse-engineered.

Feinberg might write that he’s not trying to insult these newly-minted Academy members by rejecting their entire body of work as a reason to be invited into the Academy, but that’s exactly what he’s doing. First of all, he’s acting like none of the people he’s listed have ever been in movies–they all have film credits to their name along with television credits. I mean, how many Jurassic Park films does B.D. Wong have to be in to be recognized as an actor in a film franchise, not to mention the voice of Mulan’s (bisexual) partner, Shang? Before Mr. Robot, Rami Malek was a film actor, having been part of the Night at the Museum and Twilight franchises. Heck, he just finished a movie, Buster’s Mal Heart. Doesn’t Rogue One count as a good reason for Riz Ahmed to be a part of the Academy? Also, are you really going to go as far as s**t on someone as respected and beloved as Betty White?

The bottom line is you can’t be invited to the Academy unless you’ve been in the movies or work in the film industry in some way (along with some other qualifiers such as sponsorship, etc.). For Feinberg to say that because these actors in particular have made their mark in TV as well is needlessly splitting hairs. Secondly, why not add them to the Academy?? What’s the big deal? With as long as these folks have been in the game, and with as many hours as they’ve dedicated to their craft, they deserve to give their say on what they feel are the best films of the year. It’s not like they don’t know what makes a good story, and that’s all a film is–a story. It would seem the only problem is that the Academy has proven that they aren’t just inviting people for good PR; they’re inviting people to double down on the promise it made to its members and audiences alike–to create an organization that actually reflects the movie-going public.

Feinberg is poking a bear by singling out majority POC actors whilst adding parenthetically that he has some gripes with two white male members, as if that makes his poking okay (and tell me why Hamm and Ferrigno can’t sound off on films?). This is not the hill to die on, especially if your argument is created from something as baseless as “they’ve been on TV, therefore the films they’ve been in don’t count towards Academy membership.”

Feinberg does write in an earlier post about the new members that “there is a refreshing presence of other highly accomplished minorities throughout the list” and that many among the new members, particularly the new members of the directing branch, should have been invited long ago. However, he takes such a disturbing tone in his later analysis, with the excuse for it being the argument that adding more people of color to the Academy won’t stop racism from happening in Hollywood at large. But you can’t be both for and against more representation in Hollywood, unless you’re a champion at doublethink. Besides, arguing that the Academy can’t solve racism is like not seeing the forest for the trees.

The gag is that everyone knows the Academy can’t solve industry racism by itself. The Academy, and its viewpoints up until the past year or so, is a product of a society that is still grappling with the realities of race, the sexual spectrum, mental illness, and how to deal with all of it in a respectful manner. There’s a lot more that has to happen inside of Hollywood to truly change the industry culture, sure. There’s also a lot that has to happen outside of Hollywood before it begins to trickle into Hollywood en masse. Like the Academy, Hollywood’s ills are only a product of America’s ills.

But that’s not to say the trickle isn’t already happening. We’ve seen more filmmakers bolstered by the many avenues now available to producing their visions, and we’ve seen more and more actors of color and marginalized communities speak out against terrible treatment in the industry. We’ve also seen the online community of movie fans—the audience members themselves—voice their frustration with the industry on social media, their message finding a place where it can be amplified and heard by The Powers That Be.

All of this led up to many watershed moments of representation in the past year, but none that inhabit the whole purpose of expanding the Academy more than Moonlight, an indie film showcasing a story about black gay men, winning the Oscar for Best Picture. Only two years ago, a film like that wouldn’t have made it to the nomination rounds. But, because of an Academy that had more minority members, Moonlight got the organization’s attention and became the Best Picture Winner, beating out a movie that couldn’t be more Status Quo if it tried, La La Land.

Also, the fact that more people from underrepresented communities will now have a chance to give other creators from underrepresented communities Oscar nods, it’ll give those creators the same clout and marketability their white counterparts have been enjoying for years. It’ll also give films featuring minority casts the same monetary and critical opportunities white films have never been without. In short, it’ll open up more possibilities in Hollywood for directors and actors, which will lead to more films being made, more awards given, and so on and so forth. The expansion of the Academy has the potential to have a snowball effect in Hollywood, and it can only be for the positive.

So, I, as a fellow entertainment analyst and critic myself, can’t abide the rhetoric that moves like these don’t change anything. It’s like telling the members of SNCC back in the ‘60s that their sit-ins at lunch counters wouldn’t amount to anything. Since we can now take for granted the concept of sitting at a booth in a restaurant, it would seem their sit-ins did make a world of difference. You can’t throw out progress just because it is slow and not immediately all-encompassing. That’s ridiculous.

I suggest for readers to take a look at Flavorwire’s article “THR Doesn’t Think All Those Women and POC ‘Merit’ Academy Inclusion'” by Jason Bailey, since he goes more in on Feinberg’s hitpiece-as-analysis way more than I did. But what Bailey writes at the end is particularly important:

It’s one thing for Academy members, terrified of their own obsolescence, to voice these thoughts in private (and, as writer Charles Bramesco notes, in the Reporter‘s loathsome annual tradition of ‘Anonymous Oscar ballots’). But it’s reprehensible for an industry publication like THR to hand Feinberg the bandwidth to mouthpiece it for them, with all the conviction of a country-club president who assures us that it means nothing that their membership is all-white. It’s just how things are done around here.

To end this on a positive note, I’m excited that so many actors, many of whom should have been a part of the Academy in the first place, have now been added to this illustrious roster. I’m sure they’ll serve the organization well, and I can’t wait to see what films they nominate for 2018.