This Week in Wakanda: Where is all the “Black Panther” merch?

My birthday is coming up this month, so I’ve been looking around for some cool things to buy as gifts for myself. Just on a whim, I decided to see if ThinkGeek’s paltry collection of Black Panther merchandise had upped since the last time I checked, which was a couple of months. Unfortunately, no. They still just have one page of Black Panther goods, despite the numerous pages of cool merch for other properties: 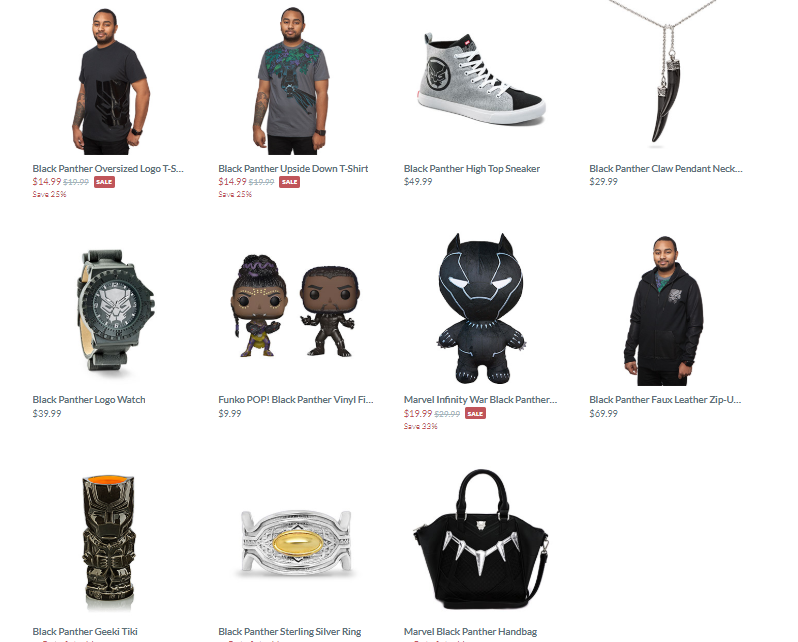 ShopDisney is a little better–most of the merch is for children, and if I had small children in my life, I’d be glad to spend some coin on the toys and books available. But when it comes to adult products, most of it are products Powered By Zazzle, as in they’re customizable stuff that you might as well get from Zazzle proper; the only difference is that Disney’s Powered By Zazzle stuff is, at the very least, officially licensed. Even with ShopDisney’s page, there’s only about a page and a half of Black Panther merch in total, which is literally bonkers, considering how huge Black Panther was as a money maker.

What’s the reason for this severe dearth of product, especially since other films like Avengers: Infinity War immediately have pages upon pages of merchandise for kids and adults at all types of price points? There’s a “business” conclusion and there’s a more cynical (and probably more realistic to the industry) conclusion. If we’re speaking strictly business, then one can assume that Disney didn’t anticipate the level of interest the film would create and the amount of product they did make–we’ll assume it’s comparable to the amount of Infinity War product–was quickly sold out. However, this doesn’t make much sense, seeing how Infinity War still had tons of products in stock after the movie came out. So not only was there a wide variety of stuff to choose from, but they also knew how much they needed to order to fulfill demand.

This gets me to my cynical point of view: Disney just didn’t think a black movie could sell as well as it did. That’s a shame, seeing how the film had a star-studded cast, not to mention a talent like Ryan Coogler as its visionary director. But my point of view isn’t unbelievable, since Coogler also had to fight Marvel for the women he had on his team, such as set designer Hannah Beachler and Oscar-nominated cinematographer Rachel Morrison, as I note in my Mediaversity Review of the film. If it was left up to Marvel, who isn’t used to working with women I guess, Beachler and Morrison wouldn’t have gotten hired, despite their amazing bodies of work in the industry.

I discuss some of the issues with merchandise in my Shadow and Act article about Marvel underestimating the power of T’Challa himself and why that Infinity War ending is not only nonsensical, but also undercuts everything Marvel built up in Black Panther.

Overall, though, it just feels like Marvel truly didn’t understand the type of void Black Panther was filling, and T’Challa’s death is like salt in a wound that was just beginning to heal. Some of the lack of foresight is evident in McFeely’s Buzzfeed response, and it’s also evident in how scarce Black Panther products are on the market. Disney had come out with a statement in April saying their stock has been depleted due to the overwhelming response to the film.

“We are thrilled that fans around the world are celebrating this incredible story through merchandise,” a spokesperson for Disney told Atlanta Black Star. “We anticipated demand would be strong, but it is exceeding even our highest expectations.” The spokesperson also told the SFGate that they were intently working on rolling out more products for the summer back-to-school season and Halloween (and most assuredly, one can assume Christmas is on the roster as well). But usually, Marvel has tons of film-related products out for a film’s release. Go to shopdisney.com and compare the Infinity War page to the Black Panther page. For Infinity War, you’ll see rows and rows of toys, collectible figures, jewelry, backpacks, makeup, books, caps and other accessories. Even though the Black Panther page has clothes and toys for kids, the amount of merchandise pales in comparison.

Toy analyst Richard Gottlieb said to The New York Post the toy industry underestimated the popularity of the film because it was a film geared toward black audiences.

“The African-American community was very excited about this movie,” he said, “but the toy industry was unsure whether it would generate broad public demand.”

BMO Capital’s Gerrick Johnson felt differently, telling Fox Business that the lack of toys is because of overall uncertainty retailers have about toy sales, and it made sense for Hasbro “to keep it tight now, as scarcity is good to keep interest and demand going into the back half.”

But to me, that doesn’t make sense when there’s a plethora of Infinity War items to choose from right now. Where’s the “scarcity is good for business” talk with these toys?

So, supposedly, we’ll get more merch come August onwards. Will this turn out to be true? We’ll just have to wait and see. I’m especially impatient for the Christmas season, since I’d love to see some Black Panther Barbie dolls without having to make my own (even though My Froggy Stuff’s Princess Shuri repaint is very awesome). But as of right now, consider me disappointed in how Disney didn’t foresee the money-making potential Black Panther had and still has.