This hot Australian game show contestant needs to star in a movie!

This video from Australian game show Hard Quiz has made the rounds on the internet, all because one of the contestants, dentist Theja Surapaneni, is RIDICULOUSLY HOT and ridiculously charming. Just take a look at the video, which Into columnist Kevin P. O’Keefe posted to his Twitter page.

I think I'm in love with an Australian game show contestant. pic.twitter.com/F9q1bzUECR

“I think I’m in love with an Australia game show contestant,” he wrote, and that pretty much sums up everyone else’s thoughts on Theja and his witticisms. Another constant wish relayed by anyone who saw the video is that this guy needs to get in a movie, STAT. It doesn’t matter if he can’t act; no one’s going to be paying attention to that small detail anyways.

Of course, being a Disney nerd, one of my first thoughts was “DISNEY PRINCEIFY HIM!” I mean, he practically is a walking, talking Disney prince. But the very, very first thought I had was that if he ever makes it to the movies, he needs to be cast in a rom-com (or just com) opposite another dreamboat, Sendhil Ramamurthy. To me, they favor one another just enough to where they could convincingly play brothers (or at least cousins) who get up to some Wacky Hijinks™. 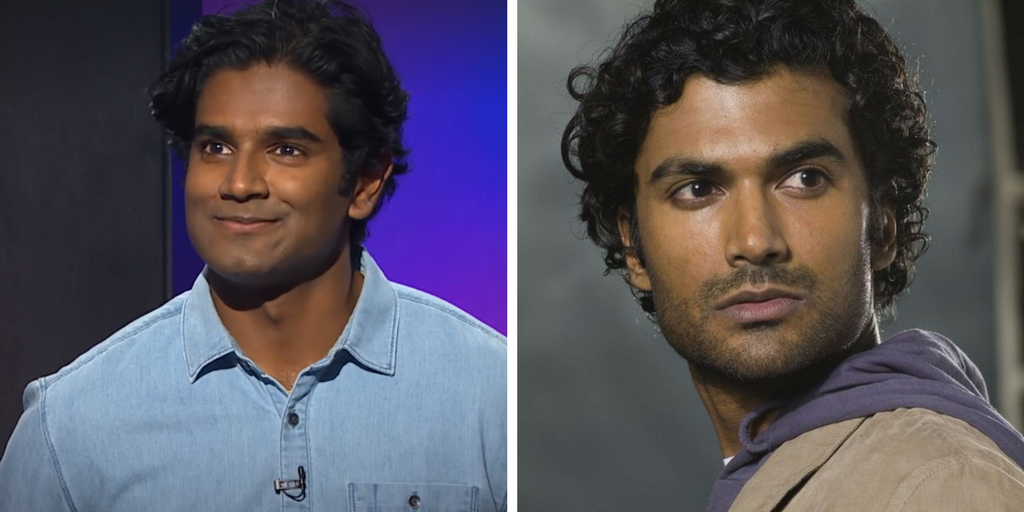 As Sophia Petrillo would say, picture it: Sendhil and Theja are two brothers who have somehow struck out with love, despite their good looks (in their minds, they think they’re average to upper-mid range on the beauty scale, at best, which we in the audience know is a courtesy lie for the rest of us). Not only are they insecure in how they look, but they’re insecure in how they present themselves to the world; each one wants what the other one has. So as an experiment, they decide to trade dating profiles and date as the other person. Maybe Sendhil’s character wishes he could break out his older sibling mentality and be the reckless, free-spirited artist Theja’s character is, while Theja wishes he could learn how to wake up at 8 in the morning and conduct his life as a banker like Sendhil so their parents can get off his back about being a “starving artist.” Enter all of the wild times and comedy of errors this switcheroo plot can allow. A movie like this with these two is bound to make beaucoup money.

But as of right now, this is just a pipe dream I came up with after staring at Theja’s face. I’m sure all of you have come up with your own ideas as to what Theja can do (and I’m sure not all of them are as innocent as imagining a rom-com).

As a parting word, I’ll leave you with this–he’s single, he told GQ India, and he’s looking for a girl who is “just a nice person, self-driven and will laugh at some of the stupid sh*t I talk about.”

I feel like a lot of us can fit that description.