3 reasons to support the #SupportPOCpods movement

We’re in Trump’s America now. Whether we like it or not (probably the latter), we are now subject to the twisty-turny lies and propaganda that will emanate from either the White House or Trump Tower. As far as politics go, it might get worse before it gets better.

But when it comes to creative and informative output from podcasters? That’s a totally different story. From where I’m sitting, 2017 is shaping up to possibly be the most explosive, creative time for entertainment and media, and that feeling is no different for the podcasting arena, especially where podcasters of color are concerned.

Podcasters of color are in the unique and fortunate position to provide their listeners with points of view intrinsic to the issues facing marginalized communities in America. These podcasters report on various topics, from movies, comics, current news, and more, but these creators also give their audiences lessons in how to think outside of their current perspectives and how to understand issues intrinsic to the marginalized American experience. These podcasters don’t set out to hold their audience’s hand, but regardless, listeners intent on learning come away from these podcasts better, more supportive allies and friends. 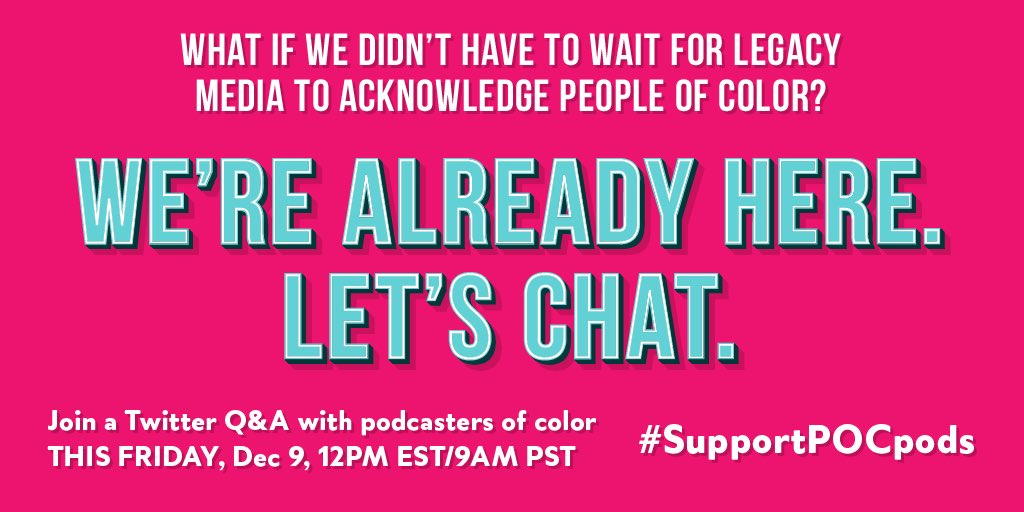 But I’ve buried the lede enough: You want to know the exact three reasons you need to support podcasters of color. It’s pretty simple.

1. Who knows what the journalism pedigree will be like in 2017. We’ll need some facts. We’re already facing malaise from having to refute or fact-check the upcoming Trump administration’s foolishness. Imagine what it’s going to be like in 2017. With newsrooms floundering to get around the learning curve that is Donald Trump, plus 24-7 news stations looking for ways to capitalize on Trump’s antics at the expense of actual muckraking, we’ll need someone out there willing to provide a counterbalance. That’s where podcasters of color come in.

Now, it shouldn’t be left up just to the podcasters to do the work journalists are supposed to be doing; the journalism industry shouldn’t be shirking its responsibilities for a quick buck. But when it comes to you wanting to retain your sanity and knowledge that yes, someone out there sees the emperor has no clothes on, then you’d be wise to turn to podcasters of color for the real truth.

3. It’s just good podcasting. Look, at the end of the day, we all want to be entertained, informed, what have you. These podcasters all excel at what they do, so if you’re just a shallow listener and want something fun to listen to (no shame in that), then why not listen to the Black Girl Nerds crew interview popular movie and TV stars? Why not check out Hard N.O.C. Life to learn about the latest in geekery? What about movie criticism/humor from No, Totally!? What about some fandom talk with Nerds of Prey? The list goes on and on and on.

As LeVar Burton so famously said, “You don’t have to take my word for it”: If you don’t want to hear this from me, how about reading about #SupportPOCpods straight from the podcasters’ themselves? Check out their open letter:

#SupportPOCpods: An Open Letter From Podcasters of Color

In the aftermath of the United States’ 2016 presidential election, many white Americans are asking how a candidate so inexorably tied to white supremacy was able to secure a seat as the leader of the free world.

People of color in the United States, however, are somewhat less surprised. We’ve seen, felt, and suffered under white supremacy as long as we’ve been alive.

Discussions examining the conditions resulting in the President-elect’s ascension have largely been variations on a limited set of themes, and are often confined to the world of political machinery. Was it the relative political weakness of his opponent? The failure of mainstream media to do its job?

At a human level, however, the story is intimately familiar to marginalized people: we are the “other,” and our position within society’s hierarchy breeds condescension, derision, and hate. Regardless of other factors, it’s no surprise to us that a candidate promising to return the country to “real Americans” could appeal widely enough to become its leader.

Traditional entertainment media has played a shameful role in normalizing the passive white supremacy successfully mobilized by our President-elect. From television news to television dramas; from independent film to Hollywood blockbusters, talented people of color face nearly impossible odds when charting career paths in the industries that shape American culture.

Even if we overcome these odds and break into mainstream entertainment, we are often unheard, unseen, or poorly represented. The vast majority of our roles are written, directed, or mediated by white people. Erasure and poor representation reinforce harmful stereotypes, robbing people of color of our individual humanity, and bigotry thrives in an environment where “others” are not humanized.

Podcasting, as a medium, can provide a powerful remedy for these ills. Unlike other forms of mass media, its low cost of entry means that podcasting isn’t intrinsically prohibitive to the historically disadvantaged in this country. Podcasting provides people of color with the opportunity to circumvent existing content creation and distribution systems that privilege whiteness.

As podcasts continue to carve space in mainstream consumption habits, however, the industry’s infrastructure seems to be perpetuating, rather than resisting, the original sins of the white-favoring context of mainstream American culture.

Consider the iTunes charts, where white-dominated public radio reigns supreme, represented by shows like This American Life, TED Radio Hour, and Tell Me Something I Don’t Know. When the top spots aren’t held by public radio, they’re often occupied by the white male-dominated comedy industry, in the form of Joe Rogan, Bill Maher, Mike Rowe, or Chris Hardwick.

Consider the challenges people of color face after crossing the aforementioned low barrier of entry into podcasting. Creating a platform is easy and inexpensive, but sustainability via profitability and increased reach is often predicated on the ability to make further investment, both financially and in terms of time. People of color in America, however, are paid less and have fewer free hours than their white counterparts.

Advertisers have become a tried and true option for podcasters to monetize their content, but listenership thresholds placed on advertising consideration exacerbate this divide. Even the methods used to gather reliable listenership data are in danger of exclusionary stratification.

Podtrac, which has been around since the early days of podcasting, provides listenership metrics for free. By contrast, however, Slate’s Megaphone platform, billed as a next-generation solution for data collection as well as publishing, is restricted to networks and podcasts with average downloads of 20,000 or more per episode. For context, in September of 2015, the median number of downloads per podcast episode was around 160. Only the top 10% of podcasts reached 5,000 downloads per episode1.

The digital divide, which describes the difficulty of vulnerable people to obtain internet access, is in danger of being replicated in the world of new media. In a culture that favors whiteness, simply applying business as usual to a revolutionary, naturally inclusive medium will result in a podcasting landscape that places undue downward financial pressure on podcasters of color.

When people ask, “how could we have stopped a bigot from reaching the White House?” one answer is that we need to love each other. To love each other, we must know each other. Podcasts provide people of color with a direct, unmediated line to fellow Americans who may never hear us otherwise.

We request that podcast advertisers and curators begin making counterbalancing efforts to provide creators of color an equal chance to succeed.

To iTunes, Google Play, Soundcloud, and all other podcast discovery and distribution platforms, we ask that you:

To any media organization creating “must-listen” podcast lists or writing stories about podcasting, we ask that you:

To listeners, we ask that you:

Independent podcasters of color have made, and continue to make, inroads declaring our worth via the quality, thoughtfulness, and humanity of our content. We believe that we are major contributors to a culture that can resist the normalization of overt scapegoating and bigotry. We ask the aforementioned organizations to take these actions in the hope that all of us may reverse the tide of hate by awakening empathy.

Shaun Lau, Host of No, Totally!

Jamie Broadnax, Founder of Black Girl Nerds and Host of the BGNPodcast

Shannon Miller, Founder and Co-Host of Nerds of Prey

Stephanie Williams, Curator and Host of The Lemonade Show

Keith Chow, Founder of The Nerds of Color and Host of Hard N.O.C. Life and DC TV Classics

Want a handy infographic to share? Spread this with the hashtag #SupportPOCpods!