The second in a series of articles for: 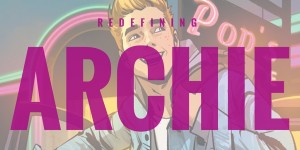 Back in the late ’00s, I wrote a ton on Jughead, my favorite Archie Comics character. The main reason I identify with him so much is because he’s the “weird” one; to quote one of the many Poirot episodes out there, Jughead’s of the world, but he’s not in the world. In other words, he can see the strings behind everything going on in his environment, yet doesn’t desire to become a part of it, nor can his friends ever truly understand his lack of desire to lose himself in the day-to-day minutae of life. Whereas Archie, Betty, and Veronica are constantly embroiled in pettiness, Jughead is usually the one with the subtle, existential view on things.

The main body of the article I’m presenting now is one of those early Jughead articles. It’s focusing on Jughead as Riverdale’s representative of American counterculture, both through his personality and, in particularly, through his clothing and hair styles. Even though all of the characters go through changes over the years, Jughead is the only character who became repurposed by Archie Comics as a window into America’s constantly evolving counterculture. Whereas Archie is “America’s Favorite Teenager,” Jughead is “America’s Favorite Outcast.”

Whether he knew it or not, John L. Goldwater, publisher and editor of Archie Comics, was a genius to have created such an influential character like Forsythe Pendleton Jones III, or, as we know him, Jughead. Actually, I think he was a bit ahead of his time. To many (and probably to Goldwater), Jughead is quirky-someone who follows the beat of their own drummer, in the cliché sense. But Jughead’s off-center personality and nonconformist aesthetic has been reflected in the decades after his first appearance in 1941.

Some background on the creation of Jughead, first. Goldwater was quoted as saying that his high-school friend, named Archie, was part of the inspiration for the character Archie. In turn, Goldwater himself was the inspiration for Jughead. “I felt like Jughead to him,” he said about their days at the New York Teachers’ Training School. “I was a very loyal friend.” It would seem that Goldwater brought a lot more to Jughead’s personality than just his loyalty; Goldwater was an orphan who hitchhiked westward during the Depression, finding work. This rough lifestyle Goldwater led in his earlier years was sure to have supplied Jughead with his loner, self-sufficient, and non-conformist sensibilities and a personality more unique than the other Archie characters.

Through most of the ‘40s, Jughead was the standard slacker who provided the snappiest comebacks in stories-lines that usually weren’t reserved for characters like Archie and Betty. But in 1947, the Beat Generation-a free-form, alternative lifestyle that rejected the conformist “square” culture and focused on different ways to realizing spirituality-bubbled up from the subculture dregs and this started seeping into mainstream throughout the 1950s. Once the Beat culture caught on, however, and college students started dressing in stereotypical berets and black leggings, the term “beatnik” arose, and this version of the Beat Generation is the one most Americans associate with the 1960s.

With Goldwater’s work with the Comics’ Code, I doubt he would’ve wanted people to view Jughead as a person with Beat sensibilities, but the laid-back, drifter personality he has, coupled with his rejection of his parents’ standards and goals for him (much to his father’s aggravation), Jughead has lends itself to those sensibilities easily. Incidentally, his love of jazz music and jazz drumming also fits eerily well into the Beat aesthetic. (I don’t think this part of his personality was made up during the time when beatniks were the rage, however.) During this time, Jughead’s clothes were either a lot more streamlined than those of other characters (fitting in with the Beat aesthetic), or there’d be something off-kilter that would differentiate him from the dress styles of the other characters:

In the late 1960s to mid-1970s, Jughead’s clothes became a little more psychedelic, again representing the Beat-and now hippie-countercultures of the ‘60s and ‘70s.

When the Jughead comic book reached 1990, there was a huge schism between the old Jughead and the new, revamped, skate punk Jughead. And boy was it drastic. So drastic, in fact, that the powers-that-be quickly changed Jughead back to his old look. But I believe their thought process to change Jughead to fit more with the times were along two lines-first, the street-skateboarding lifestyle was everywhere during the late 1980s and early 1990s, and if it’s the hottest new thing, why not cash in on it? Secondly, Jughead’s personality was all about being the exception to the rule and the counter to the mundane that Archie represented; it would seem natural that he would take up a skateboard and start skating. I don’t know if he would shave his head, as shown in the examples below, but he definitely might take up skateboarding.

Also, one of the characteristics of the punk lifestyle (the original punk lifestyle, not just skate punk) is the D.I.Y. ethic-to make, grow, or find everything you need yourself. Even though Jughead would have to satisfy his Pop Tate-made hamburger cravings every now and again, the do-it-yourself idea seems like it would be something Jughead would take part in, at least for a little while. Being honest, even though the beginning of the ’90s saw the most radical change in Jughead ever, the covers were the most creative and innovative I’ve ever seen. I wish they made covers like these again, sans-Jughead weird haircut.