Race, the biopic of Jesse Owens and his historic Olympic Games showing in 1936 Berlin, will soon be in theaters to trill and inspire audiences. The film, starring Stephan James as Owens, focuses on perseverance and success amid what would appear to be insurmountable struggle. Owens’ driven quality have inspired Chantel Riley, who plays Quincella Nickerson in the film.

JUST ADD COLOR was excited to have this exclusive interview with Riley, who talked about her stage life prior to film, how Race could be a contender for the 2017 Oscars, and her feelings about #OscarsSoWhite. To learn more about Race click here to see film stills and clips. Race comes to theaters Friday, Feb. 19.

Tell me about Quincella, your character.

Quincella Nickerson is real, so she was actually around. She met Jesse in California. He had a track meet there and she’s always been into sports. From the research I read of her online–there’s not much–said that she was Jesse’s number one fan. Quincella Nickerson was always around when he was around. She was at all of his track meets and even at special events with celebrities and politicians, she would be around and he would invite her to the parties.

She was well known herself; she was a socialite. Her father was a businessman, very affluent in that time, especially in the 1930s; being a wealthy African-American man in the 1930s wasn’t very known in that time. So, a lot of people knew who her father was and who she was. I think she loved going out and being around people.

This is your first movie role. How is it to cut your film teeth on a project like this?

I was very shocked when I booked this role, and now I’m really excited. For it to be a movie like this is a big deal for me. I haven’t been in the industry that long, compared to most people, and to have your first film be something like this, and that this story is so powerful and for it to be about someone like Jesse, is such an honor for me. I’m so glad I can call this my first film project.

You come from the stage, having played Nala in The Lion King. First, how cool is it to have played a role like that, and second, what were some of the differences between stage and film acting that you had to get used to?

I’ve been in the [Nala] role for four years now, going on five, and it was the only thing I’ve done. It was very challenging to me at first to be on set. You have to be aware of your surroundings; you have to be aware of camera angles and…to make sure [the cameraman] can see your face. A lot of that I had to get used to. But on the stage, you just have to make sure your back’s never to the audience. When you’re on set…you’ve got to make sure you’re well aware of your surroundings and of every angle; they’ll shoot a scene from one area and they’ll shoot the exact same scene and you have to do it the exact same way from across the room. That was a little bit challenging.

Also, too, [The Lion King] was a live performance every night, so I think I pressured myself a lot to get every take perfect the first time because you’re so used to doing that onstage. You get one chance on stage in front of the audience; it’s not like you do a scene and then you’re like, “OK, guys, let me take that from the top and try this again.” You go all out. That’s definitely another major different from stage and set. 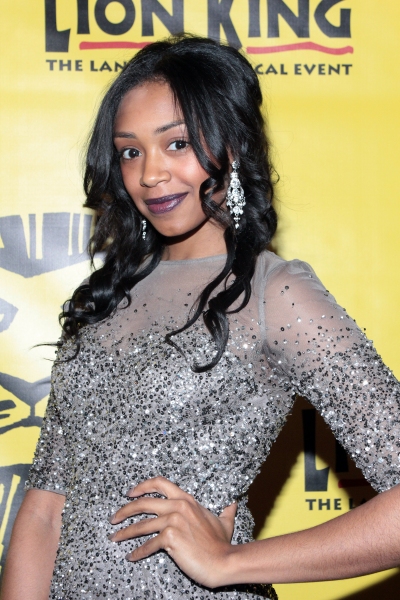 Race is a film that’s hoping to inspire audiences, much like 42. How did the film and its story inspire you?

Just knowing what Jesse had to go through during that time, I can’t even imagine what it’s like. I mean, it’s not too far off from what’s going on now, but just getting adversity just from the color of his skin and people looking down on him because of the color of his skin. It really taught me to push through no matter what and to not let anybody’s idea of you stop you from becoming the star you want to become or the person you really want to see yourself to be and God sees you to be also.

I just admire his courage to go through what he did, especially in a time during the Hitler regime and going to the Olympic Games…[Owens] had to make that decision [to go to the Games or stay]. He made that decision to go, and thank God he did, because he killed it, obviously, and won four gold medals. [He] proved not only to Hitler, but to the world, how amazingly talented he is and how you can be if you just put your mind to it and push. What he did for people of color was just incredible and proved to the world that we are more than what [they] think we are. It really inspired me to push.

Even in the film industry right now, #OscarsSoWhite has been going around and I don’t want to use [Hollywood’s discrimination] as an excuse to say they won’t hire me because I’m black. I want to be able to use that as a challenge and flip that around for the better for myself and say I can overcome that challenge, the same way Jesse did. I’m not going to use it as an excuse to say I’m never going to make it. No–I’m going to break that barrier and show [Hollywood] that I can make it!

#OscarsSoWhite has been a big topic. Race could be one of the films that breaks the Academy’s color barrier come nomination time in 2017. What do you think of the importance of a film like Race for our culture, especially in light of the Academy debacle?

It’s such a relief to see people that look like myself on film, and to see that people are excited about it. What it’s doing now is that it’s inspiring other filmmakers and directors and casting directors to now say, “Let’s try to make a difference here, let’s change it up and give people of color a chance.” There’s no doubt that we aren’t just as talented, just as smart, just as creative as they are. And goes for black, Hispanic, Native, Asian–we can do just as much as they can, it’s just a matter of giving us the chance to do so. That’s why I’m so excited for Race, and for the Nat Turner film that just came out at Sundance [The Birth of a Nation]. It [shows] what we are capable of doing and…[gives] us that chance to tell a story. Whether it’s a historic figure or non-historic figure, just give us the chance to tell that story.

It’s kind of bittersweet what’s going on, because it’ has to be talked about. I’m glad that it’s now being talked about and people are now making changes to make that happen. Because I believe that you have to start from the internal. Look at the makeup of the Academy. It’s like 95 percent men and 90 percent white or some kind of crazy, ridiculous number like that? It just starts form the internal source and make a change that way. And it’s not just a race difference, but age difference matters too. A guy that’s 80 years old isn’t going to understand or relate to films like Straight Outta Compton, you know what I’m saying? They definitely need to change it up and I’m glad that they are finally making that decision to do so.

What do you hope people learn from Race?

What I really hope people learn from this film is perseverance and believing in yourself to know you can make a difference. Jesse worked hard his whole life and pushed himself to limits only a few of us could ever imagine, but you see the benefits of doing so, of pushing and not letting trials and tribulations cut your dream off. We all go through it–we all have a dream and we all struggle, but you can’t let the struggle completely cut off the goal. We get to the point where we’re so close, and I just want everyone to persevere and push through because there is light at the end of the tunnel.