Harry Potter character Draco Malfoy is an amazing character. He’s one of those characters who are racist, growing up in a household where certain “ideals” are taught, but soon realize how terrible their minds have been when the real world gets dropped on them. Draco had that happen to him in spades, and for years, I liked to think he was better for it. But J.K. Rowling had denied me that pleasure in canon. Until now. Through Pottermore (which you need a login for), she finally shared the rest of Draco’s story.

I’ve tooted my own horn before on this site, and guess what? I’m going to toot it again. I’ve long since said on my old site Moniqueblog that Draco’s arc wasn’t given the ending it deserved. Rowling has her own issues with Draco, including her constant shock at his large fanbase, and the last few books, especially the very last one, Harry Potter and the Deathly Hallows, felt rushed and poorly edited, leaving certain points, like Draco’s final part of his arc, completely left out of the climax and denouement.

Anyways, the horn-tooting comes from the fact that Rowling wrote the ending she should have given him when the books were still fresh. She made him 1) a less awful person than he was before 2) has shown that he’s grown from his brush with Voldemort and 3) is adamant about having Scorpius grow up to be the person he should have been. His wife is about that do-good life too, which is great.

Here are the quotes from the essay:

“Draco married the younger sister of a fellow Slytherin. Astoria Greengrass, who had gone through a similar (though less violent and frightening) conversion from pure-blood ideals to a more tolerant life view, was felt by Narcissa and Lucius to be something of a disappointment as a daughter-in-law. They had had high hopes of a girl whose family featured on the ‘Sacred Twenty-Eight,’ but as Astoria refused to raise their grandson Scorpius in the belief that Muggles were scum, family gatherings were fraught with tension.”

“I imagine that Draco grew up to lead a modified version of his father’s existence; independently wealthy, without any need to work, Draco inhabits Malfoy Manor with his wife and son. I see his hobbies further confirmation of his dual nature. The collection of Dark artefacts harks back to family history, even though he keeps them in glass cases and does not use them. However, his strange interest in alchemical manuscripts, from which he never attempts to make a Philosopher’s Stone, hints at a wish for something other than wealth, perhaps even the wish to be a better man. I have high hopes that he will raise Scorpius to be a much kinder and more tolerant Malfoy than he was in his own youth.”

She even says something I’ve written many times before, which is that Draco’s path was set for him by his upbringing. Basically, the fault lies on his parents.

“I pity Draco, just as I feel sorry for Dudly. Being raised by either the Malfoys or the Dursleys would be a very damaging experience, and Draco undergoes dreadful trials as a direct result of his family’s misguided principles.”

I still think there’s a part of her essay which struck me as odd: Draco’s parents suffered the same rude awakening as their son, so why are they still expecting life to be business as usual when it comes to blood politics? Unless they are like those parents who say they “aren’t racist” but still react harshly when their son comes home with a non-white girl. I don’t know. I would think the Malfoys would all try to, as Prince would say, “get through this thing called life” together instead of getting tense over Astoria wanting to teach their grandson what their son now knows all too well. As Rowling says herself, the Malfoys love each other very much.

“They love each other. Draco is motivated quite as much by fear of something happening to his parents as to himself, while Narcissa risks everything when she lies to Voldemort at the end of Deathly Hallows and tells him that Harry is dead, merely so that she can get to her son.”

They’re one of the closest families we have in the book, and since they’re the evil people, that’s saying something. I just wish Rowling would expound on that a little more and how the Malfoys, even if they are a little set in their ways, are able to see things a little differently than before. They don’t have to like non-pure-bloods, but it would be great if they show some sort of tolerance after the horrors they’ve faced. But, it’s not my book, so my opinion is just out here.

Overall, I’m glad Rowling has finally given Draco his due. This simple recognition of Draco doing his best to change into a better person is what spawned my year’s worth of posts about Draco on Moniqueblog, which I culled together into a free e-book. Download it from Issuu or by clicking the cover below. 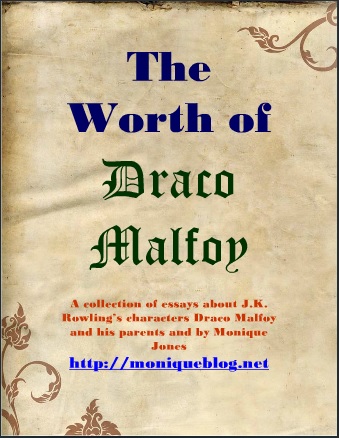