I’ve been thinking about Thranduil a lot. Most of my thinking has been about how I knew people would receive him, as shown by this article and lots of things on Tumblr and this Twitter page. Even I have talked about Thranduil in a slightly “fabulous” manner, describing him to my siblings and in a movie review as the Mariah Carey of The Hobbit. If you’ve seen The Hobbit: The Desolation of Smaug, you may or may not have thought something along these lines as well. But the question is: Why did we think this? To break it down further, what in Thranduil’s characterization led a lot of people to assume that Thranduil was, to use the loaded term again, “fabulous”?

Well, I think Tumblr user landofexpectations sums it up in their post:

“Hey Thranduil is presenting a little bit feminine, that’s sort of neat, I wonder why they made that ch–”

Before anyone says anything, yeah, Thranduil is technically not a villain. But he’s got some villainous tendencies. And the costume designer for Thranduil is quoted in the official movie guide as saying that she used Thranduil’s semi-villainy as a launching pad for her designs:

“I wanted Thranduil to have a slightly sinister look, so I designed a brooch for him to wear at his throat that has a tendril design and, in a claw setting, a piece of mineral called iron pyrite, or Fool’s Gold. Over this garment he has a robe with a massive train ad a gorgeous lining of shot purple and orange Lurex that looks like fire. The whole effect gives Thranduil a feeling of being a creature of fire and ice.”

“I’m working on the idea that there was a time when the wood was healthy and beautiful, the Elves were wise and innocent and Thranduil was the Greenwood. Now however, he has become, instead, the physical embodiment of Mirkwood, allowing the hunger and greed into his heart. Although he is aware of it, he is incapable of overcoming it.”

And movement coach, Terry Notary, talked about Thranduil’s struggle with his evil side:

“In the case of Thranduil, he’s incredibly powerful and arrogant–it’s like a little twist of smoke that seems to seep out of him and he has to keep this characteristic in check…There is a struggle permanently going on within him: a battle between his desire to unleash this evil side and reining himself back.”

It’s important that this is established, because Thranduil’s villainy is the main reason so many people have read him as “fabulous,” “gay,” etc., even though he (more than likely) isn’t. So what does villainy  have to do with it? Because associating gay tendencies with villainy is a very Hollywood thing to do. The proper term for this is “queer-coding.”

Here’s a description of what “queer-coding” is, as written by Media Smarts:

Sometimes characters (as is the case with [High School Musical‘s Ryan Evans]) are coded as queer (using verbal and visual markers to connote queerness without explicitly stating it. This includes elements such as body language, vocabulary, dress, vocal inflection, and various other aspects that are peripheral to sexual orientation), other times the subtext is unintentional.

As I’ve said above, queer-coding is a very Hollywood thing to do. It goes back to the 1930s, when the Hayes Code was introduced. According to Media Smarts:

From the 1930s to the 1950s, religious and women’s groups criticized Hollywood films for contributing to immorality. As a result, the industry introduced the Hayes Code, a system of self-censorship that, among other things, affected the portrayal of homosexuality. During these years, films could not feature overtly homosexual characters – so homosexuality was coded into a character’s mannerisms and behaviours.

Also, to quote The Rouge Feminist:

[Q]ueer coding typically has a negative connotation. The term often dates back to the Celluloid Closet, when, from 1930 to 1968 there was a legal ban on queer characters or any explicit reference to homosexuality in Hollywood, and queer coding allowed directors to get queerness past the censors. However, characters who have been queer coded have typically been psychotic killers, villains and other evil people. Villains like Scar in The Lion King, Jafar in Aladdin the killer in Strangers on a Train, the murderer in American Psycho, many villains in the James Bond series, the killing male twosome in The Rope, the list goes on and on have been queer-coded. The result of queer coding typically has been to subliminally relate evil and badness to queerness and queer people.

Now that the Celluloid Closet is over, queer-coding still continues to happen. The villain in Xerxes is clearly queer coded. As is Ghirahim in Skyward Sword. Many different media and genres include queer coding because homophobia is ubiquitous.

Even traits that have become tropes for villains (being well-dressed; having feminine mannerisms or manner of speech; being aristocratic in manner, wealth and appearance; being a smooth talker; having flamboyant hand gestures, manners of dress, and decor in their homes/lairs; having little to no interest in women; being conniving or catty etc etc etc show how deeply imbedded queer coding as been to the point where queer qualities are associated with evil. (Many of those traits are associated with men – but women too are often queer coded as mannish, thuggish, brutish, beastly, bulky, violent, overly ambitious or aggressive, cruel, uninterested in men, etc).

There’s nothing explicitly “queer” about Thranduil. But there is the overall campiness of Lee Pace’s performance that kind of sells the idea that Thranduil could be seen as a homosexual character. Also, there’s the studied posing that Pace commits to. Take a look at some of the B-roll footage:

Of course, one way his mannerisms could be interpreted is that they’re the mannerisms of a “fat cat”-type: an exceedingly rich, overly pampered, and spiritually corpulent king. However, his mannerisms, combined with the subtle flair embedded in Thranduil’s speech and movements (including his facial expressions), his luxurious robes, and his lust for gold and power could also lead an audience to think that Thranduil’s exotic nature as an elf comes from his “queerer” aspects. It also doesn’t help that J.R.R. Tolkien didn’t write in a description of Thranduil’s wife, leaving Thranduil to appear to not have an interest in women.

One thing that also doesn’t help with Thranduil’s association with “queerness” is the fandom linking the character to another character Pace played transgender burlesque dancer Calpernia Addams in the 2003 TV movie, Soldier’s Girl, based on a real story. In fact, one of the Tumblr links above shows how the fandom has conflated the two characters together since Calpernia wears a very Thranduil-esque wig in a scene from Soldier’s Girl. 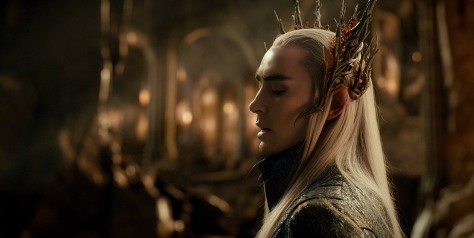 So is the collective assumption that Thranduil is gay wrong? Well, yeah. I mean, it should be, since by Hollywood standards, “gay” is equivalent to “evil” or “disturbingly different.” One current glaring example of that is Loki from the Thor franchise. He has always been a shapeshifter in the comics and even pretended to be Lady Sif for quite a long run, but now, thanks to the run of a brand new Loki comic book, a canonical part of the character is that he is bisexual and able to change gender. I don’t know if this will show up in any of the upcoming films, but it’s highly suspect that the main villain in a film is also part of the LGBT community. ComicsAlliance’s Andrew Wheeler writes exclusively about this in his article on queerness and the pitfalls of LGBT villains.

If Thranduil was a villain who just happened to also be gay, then that would be a different story. But he’s not; he’s a villain who’s villainy is associated with “queerness” due to subliminal traits that have been linked to him. It seems like they were linked pretty unconsciously as well; Pace mentions in interviews that his main inspirations for Thranduil were The Fisher King and King Louis XIV, not any character or figure linked to gay culture. Yet, coded traits still pop up in Thranduil’s characterization. I’m not blaming Pace or anyone for the queer-coding of Thranduil, since it’s so entrenched in our movie-going and movie-making psyches that even someone like me, who tries to be as enlightened as possible, still falls victim to it.

One thing Hollywood could do is find a different way to signify “otherness,” a way that has nothing to do with race, culture, sexuality, or gender. A reason I don’t see the queer code going away anytime soon is because there is an inherent allure to these characters. To quote ComicsAlliance’s Wheeler:

The very qualities that can make an LGBT character seem dangerous and transgressive can also make them glamorous and seductive. Yes, queer identities have established cultural value as signifiers of deviancy, but they also have value as signifiers of radical reinvention, of rock and roll. That’s really the same quality through a different lens. A character is both dangerous and glamorous if he undermines patriarchy and subverts convention, and audiences are drawn to that transgressiveness.

I don’t know how Hollywood will change its subliminal coding system, but Hollywood’s supposed to be a filled with a bunch of creative people; I think they should be able to figure it out.